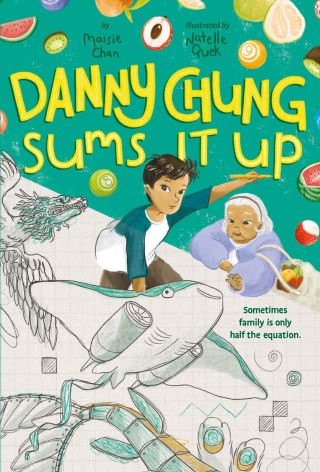 Danny Chung Sums It Up

Eleven-year-old Danny’s life is turned upside down when his Chinese grandmother comes to live with his family in England. Things get worse when Danny finds out he’ll have to share his room with her, and she took the top bunk! At first, Danny is frustrated that he can’t communicate with her because she doesn’t speak English—and because he’s on the verge of failing math and Nai Nai was actually a math champion back in the day. It just feels like he and his grandmother have nothing in common. His parents insist that Danny help out, so when he’s left to look after Nai Nai, he leaves her at the bingo hall for the day to get her off his back. But he soon discovers that not everyone there is as welcoming as he expected . . . Through the universal languages of math and art, Danny realizes he has more in common with his Nai Nai than he first thought. Filled with heart and humor, Danny Chung Sums It Up shows that traversing two cultures is possible and worth the effort, even if it’s not always easy.

Maisie Chan:
Maisie Chan is a British-born Chinese author. She has written early reader books for Hachette and Collins; a collection of fairy tales, myths, and legends in Stories From Around the World for Scholastic; as well as many stories for The Big Think, a well-being curriculum based around stories for elementary school children. She also started the group Bubble Tea Writers to support and encourage new British East and Southeast Asian writers in the UK. When Maisie isn't writing, she enjoys yoga, dim sum, and singing really loud. She has lived in the U.K., U.S., and Taiwan. Originally from Birmingham, Maisie now lives with her family in Glasgow.