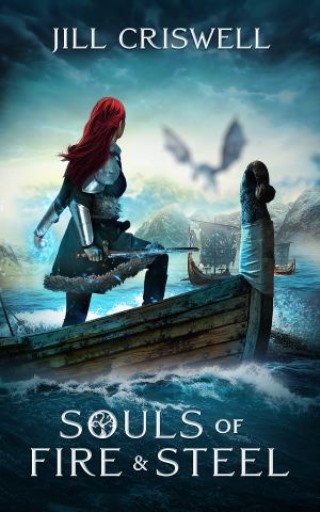 Souls of Fire and Steel

To save her lover’s life, Lira of Stone swore allegiance to a demigod known as the Dragon. She’s transformed into his weapon—the Dragon’s death-bringer, using her gifts to conquer nations and unleash demons. Yet there’s a part of Lira not even the Dragon can stifle, and the soul-reader must find a way to free herself before he declares war against the gods.

After the warrior Reyker Lagorsson attempted to overthrow the Dragon, Reyker’s soul was fractured. Now, he’s a shadow of his former self, and his battle-madness grows stronger by the day. Reyker will stop at nothing to kill the Dragon and his mysterious death-bringer before his curse consumes him.

In the final installment of the Frozen Sun Saga, Lira and Reyker face off as enemies, confront their worst nightmares, and make their last stand against the Dragon. But can a god be killed? And if so, at what cost?

Jill Criswell is a writer of young adult historical fantasy. Born and raised in the swamps of northeastern Florida, she earned degrees in English and psychology and an MFA in creative writing from the University of Central Florida. Her greatest passion, besides reading and writing, is traveling the world; she’s visited fifty countries across six continents, falling in love with places like Iceland, Namibia, and Cambodia. She works as a university English teacher and lives in South Carolina, near the foothills of the Blue Ridge Mountains, with her husband and daughter (who is named after a volcano in Iceland). She is the author of Beasts of the Frozen Sun and Kingdom of Ice and Bone, the first two books in the Frozen Sun Saga. For more information, visit JillCriswell.com.