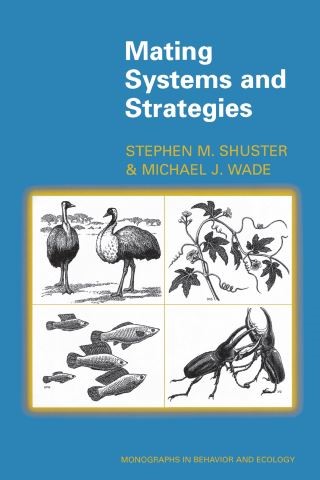 This book presents the first unified conceptual and statistical framework for understanding the evolution of reproductive strategies. Using the concept of the opportunity for sexual selection, the authors illustrate how and why sexual selection, though restricted to one sex and opposed in the other, is one of the strongest and fastest of all evolutionary forces. They offer a statistical framework for studying mating system evolution and apply it to patterns of alternative mating strategies. In doing so, they provide a method for quantifying how the strength of sexual selection is affected by the ecological and life history processes that influence females' spatial and temporal clustering and reproductive schedules.


Directly challenging verbal evolutionary models that attempt to explain reproductive behavior without quantitative reference to evolutionary genetics, this book establishes a more solid theoretical foundation for the field. Among the weaknesses the authors find in the existing data is the apparent ubiquity of condition-dependent mating tactics. They identify factors likely to contribute to the evolution of alternative mating strategies--which they argue are more common than generally believed--and illustrate how to measure the strength of selection acting on them. Lastly, they offer predictions on the covariation of mating systems and strategies, consider the underlying developmental biology behind male polyphenism, and propose directions for future research.


Informed by genetics, this is a comprehensive and rigorous new approach to explaining mating systems and strategies that will influence a wide swath of evolutionary biology.