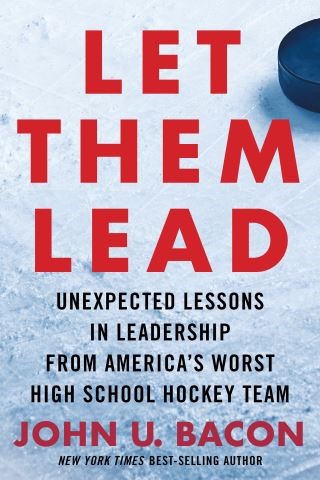 An uplifting leadership book about a coach who helped transform the nation’s worst high school hockey team into one of the best. Bacon’s strategy is straightforward: set high expectations, make them accountable to each other, and inspire them all to lead their team.

When John U. Bacon played for the Ann Arbor Huron High School River Rats, he never scored a goal. Yet somehow, years later he found himself leading his alma mater’s downtrodden program. How bad? The team hadn’t won a game in over a year, making them the nation’s worst squad—a fact they celebrated. With almost everyone expecting more failure, Bacon made it special to play for Huron by making it hard, which inspired the players to excel. Then he defied conventional wisdom again by putting the players in charge of team discipline, goal-setting, and even decision-making – and it worked. In just three seasons the River Rats bypassed 95-percent of the nation’s teams.

A true story filled with unforgettable characters, stories, and lessons that apply to organizations everywhere, Let Them Lead includes the leader’s mistakes and the reactions of the players, who have since achieved great success as leaders themselves. Let Them Lead is a fast-paced, feel-good book that leaders of all kinds can embrace to motivate their teams to work harder, work together, and take responsibility for their own success.

John U. Bacon has written for The Wall Street Journal, The New York Times, The Washington Post, Sports Illustrated, ESPN, and NPR, among others. He has authored seven national bestsellers on sports, business, health, and history. A popular corporate speaker, executive coach, and leadership consultant, Bacon lives in Ann Arbor with his wife and son.