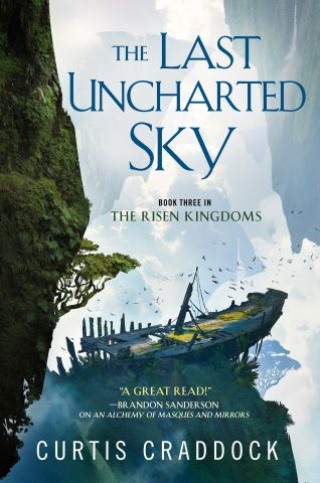 Book 3 of The Risen Kingdoms

Isabelle and Jean-Claude undertake an airship expedition to recover a fabled treasure and claim a hitherto undiscovered craton for l'Empire Celeste. But Isabelle, as a result from a previous attack that tried to subsume her body and soul, suffers from increasingly disturbing and disruptive hallucinations. Disasters are compounded when the ship is sabotaged by an enemy agent, and Jean-Claude is separated from the expedition.

In a race against time, Isabelle must figure out how to ward off her ailment before it destroys her and reunite with Jean-Claude to seek the fabled treasure as ancient secrets and a royal conspiracy threaten to undo the entire realm.

“A gripping tale of a woman who refuses to be defined by her physical and magical limitations, thwarting both assassins and all who see her as a pawn. A great read!”—#1 New York Times bestselling author Brandon Sanderson, on An Alchemy of Masques and Mirrors

Curtis Craddock: Curtis Craddock lives in Sterling, CO where he teaches English to inmates in a state penitentiary. An Alchemy of Masques and Mirrors is his first book.