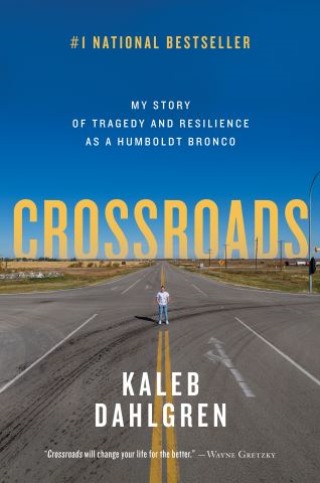 My Story of Tragedy and Resilience as a Humboldt Bronco

An inspiring story of hope and resiliency

On April 6, 2018, sixteen people died and thirteen others were injured after a bus taking the Humboldt Broncos junior hockey team to a playoff game collided with a transport truck in a rural intersection. The tragedy moved millions of people to leave hockey sticks by their front door to show sympathy and support for the Broncos. People from more than eighty countries pledged millions of dollars to families whose relatives had been directly involved in the accident.

Crossroads is the story of Kaleb Dahlgren, a young man who survived the bus crash and faced life after the tragedy with resiliency and positivity. In this chronicle of his time with the Broncos and the loving community of Humboldt, Saskatchewan, Dahlgren takes a hard look at his experience of unprecedented loss, but also revels in the overwhelming response and outpouring of love from across Canada and around the world. But this book also goes much deeper, revealing the adversity Dahlgren faced long before his time in Humboldt and his inspiring journey since the accident.

From a childhood spent learning to live with type 1 diabetes to his remarkable recovery from severe brain trauma that astounded medical professionals, Dahlgren documents a life of perseverance, gratitude and hope in the wake of enormous obstacles and life-altering tragedy.

The author will donate a portion of his proceeds from this book to STARS (Shock Trauma Air Rescue Service).

KALEB DAHLGREN is the former assistant captain of the Humboldt Broncos hockey team and one of thirteen survivors of the tragic bus crash. Shortly after getting out of the hospital, Dahlgren joined the York University Lions varsity hockey team. He graduated from York University in 2021 and is now studying at the Canadian Memorial Chiropractic College. The founder of Dahlgren’s Diabeauties, a program that supports children with type 1 diabetes, Kaleb Dahlgren shares his message of hope and healing with groups across North America.