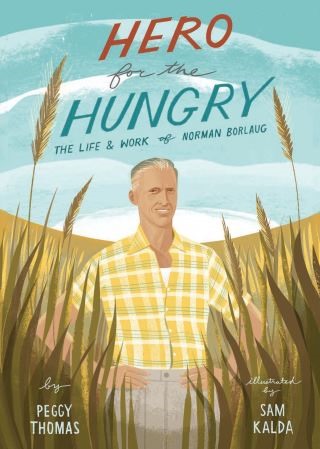 Hero for the Hungry

The Life and Work of Norman Borlaug

A moving and informative biography of the 20th-century American agriculture scientist whose innovations in crop varieties founded the Green Revolution and fed hundreds of millions of people around the world - with full-color chapter illustrations and STEM - and history-themed text features throughout.

Can a quiet Iowa farm boy grow up to change the world? Norman Ernest Borlaug did. Born in 1914, raised on a small farm, and educated in a one-room schoolhouse, Norman Borlaug learned to work hard and excelled in sports, and later studied forestry in college, eventually becoming a plant scientist. Readers will discover how even from a young age Norman Borlaug dedicated his life's work to ending world hunger. Working in obscurity in the wheat fields of Mexico in the 50s and 60s, Norm and his team developed disease-resistant plants, and when widespread famine threatened India and Pakistan, Norm worked alongside poor farmers, battled bureaucracy, and fearlessly stood up to heads of state to save millions of lives from mass starvation.

Often called the “Father of the Green Revolution,” Norm helped lay the groundwork for agricultural technological advances that alleviated world hunger, and he went on to win the Nobel Prize for Peace in 1970. He was a true hero for the hungry.

Text features throughout the book include: Sidebars on the science of plant hybridization and pathology Norman was using to produce new and better wheat varieties Information on a range of agriculture and plant life concepts, including agronomy, wheat genes, photoperiodism, stem rust, nutrients and more.

Back matter including a timeline of events and discoveries, and a call to action for readers to think about how they can use science to solve problems and how they can do small things to help with hunger and food waste Hero for the Hungry is excellent for a science class learning about genetics, an agriculture class studying agronomy, or a history or English class looking for a well-written biography on a hero scientist.

Peggy Thomas: Sam Kalda is an illustrator and artist based in Saint Paul. His commissioned works include editorial, book, advertising and pattern illustration. In 2017, he received a gold medal in book illustration from the Society of Illustrators in New York. He also won a medal from the Cheese Club in college for being able to identify the most amount of, well, cheeses. His first book, Of Cats and Men: History's Great Cat-loving Artists, Writers, Thinkers and Statesmen, was published by Ten Speed Press in 2017. He recently illustrated his first picture book, When We Walked on the Moon, written by David Long and published by Wide Eyed Press in 2019, as well as the follow-up, When Darwin Sailed the Sea. Peggy Thomas has always loved true stories, and can’t remember a time when she wasn’t thrilled to find animal bones, musty encyclopaedias, or a history plaque by the side of the road. It's that same curiosity that has fueled the research and writing of more than twenty nonfiction books for children.