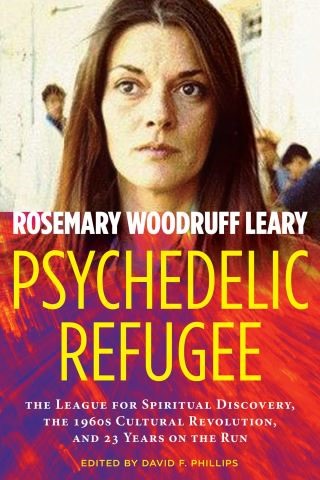 The League for Spiritual Discovery, the 1960s Cultural Revolution, and 23 Years on the Run

• Shares Rosemary’s early experimentation with psychedelics in the 1950s, her development through the psychedelic revolution of the 1960s, and her involvement, at first exciting but then heartbreaking, with Dr. Timothy Leary

• Describes her LSD trips with Leary, their time at the famous Millbrook estate, their experiences as fugitives abroad, including their captivity by the Black Panthers in Algeria, and Rosemary’s years on the run after she and Timothy separated

One of the original female psychedelic pioneers, Rosemary Woodruff Leary (1935-2002) began her psychedelic journey long before her relationship with Dr. Timothy Leary. In the 1950s, she moved to New York City where she became part of the city’s most advanced music, art, and literary circles and expanded her consciousness with psilocybin mushrooms and peyote. In 1964 she met two former Harvard professors who were experimenting with LSD, Timothy Leary and Ralph Metzner, who invited her to join them at the Millbrook estate in upstate New York. Once at Millbrook, Rosemary went on to become the wife--and accomplice--of the man Richard Nixon called “the most dangerous man in America.”

In this intimate memoir, Rosemary describes her LSD experiences and insights, her decades as a fugitive hiding both abroad and underground in America, and her encounters with many leaders of the cultural and psychedelic milieu of the 1960s. Compiled from Rosemary’s own letters and autobiographical writings archived among her papers at the New York Public Library, the memoir details Rosemary’s imprisonment for contempt of court, the Millbrook raid by G. Gordon Liddy, the tours with Timothy before his own arrest and imprisonment, and their time in exile following his sensational escape from a California prison. She describes their surreal and frightening captivity by the Black Panther Party in Algeria and their experiences as fugitives in Switzerland. She recounts her adventures and fears as a fugitive on five continents after her separation from Timothy in 1971.

While most accounts of the psychedelic revolution of the 1960s have been told by men, with this memoir we can now experience these events from the perspective of a woman who was at the center of the seismic cultural changes of that time.

Rosemary Woodruff Leary: Rosemary Woodruff Leary (1935-2002) was one of the great female psychedelic pioneers of the 1960s. She met Dr. Timothy Leary in 1964, becoming his psychonaut partner at the Millbrook estate and later his wife. After Timothy’s prison break in 1970, Rosemary fled with him to Algeria, beginning a years-long fugitive journey across four continents and nearly 25 years of life underground.