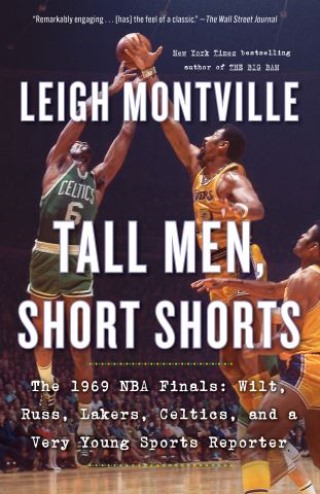 This "part memoir, part sports story" (Wall Street Journal) from the New York Times bestselling author of The Big Bam chronicles the clash of NBA titans over seven riveting games—Celtics versus Lakers, Russell versus Chamberlain—covered by one young reporter. Welcome to the 1969 NBA Finals!

They don’t set up any better than this. The greatest basketball player of all time - Bill Russell - and his juggernaut Boston Celtics, winners of ten (ten!) of the previous twelve NBA championships, squeak through one more playoff run and land in the Finals again. Russell’s opponent? The fearsome 7’1” next-generation superstar, Wilt Chamberlain, recently traded to the LA Lakers to form the league’s first dream team. Bill Russell and John Havlicek versus Chamberlain, Jerry West and Elgin Baylor. The 1969 Celtics are at the end of their dominance. The 1969 Lakers are unstoppable.

Add to the mix one newly minted reporter. Covering the epic series is a wide-eyed young sports writer named Leigh Montville. Years before becoming an award-winning legend himself at The Boston Globe and Sports Illustrated, twenty-four-year-old Montville is ordered by his editor at the Globe to get on a plane to L.A. (first time!) to write about his luminous heroes, the biggest of big men.

What follows is a raucous, colorful, joyous account of one of the greatest seven-game series in NBA history. Set against a backdrop of the late sixties, Montville’s reporting and recollections transport readers to a singular time – with rampant racial tension on the streets and on the court, with the emergence of a still relatively small league on its way to becoming a billion-dollar industry, and to an era when newspaper journalism and the written word served as the crucial lifeline between sports and sports fans. And there was basketball – seven breathtaking, see-saw games, highlight-reel moments from an unprecedented cast of future Hall of Famers (including player-coach Russell as the first-ever black head coach in the NBA), coast-to-coast travels and the clack-clack-clack of typewriter keys racing against tight deadlines.

Tall Men, Short Shorts is a masterpiece of sports journalism with a charming touch of personal memoir. Leigh Montville has crafted his most entertaining book yet, richly enshrining luminous players and moments in a unique American time.

Leigh Montville: Three-time New York Times bestselling author Leigh Montville is a former columnist at the Boston Globe and former senior writer at Sports Illustrated. He is the author of Sting Like a Bee, Evel, The Mysterious Montague, The Big Bam, Ted Williams, At the Altar of Speed, Manute, and Why Not Us? He lives in Boston.