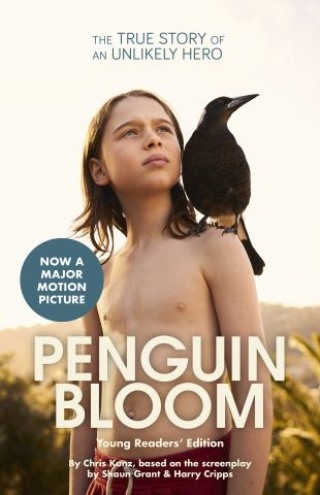 Inspired by the true story of an unlikely hero, and adapted from the major motion picture starring Naomi Watts, Andrew Lincoln and Jacki Weaver

I guess we all kinda knew our life was perfect and that we wouldn't change a thing.

But sometimes you don't get that choice, do you? Sometimes stuff happens that you would do anything to try to avoid. But you can't. And that's what happened to us.

Penguin Bloom tells the true story of Sam Bloom, a young mother whose world is turned upside down after a near-fatal accident leaves her unable to walk. Sam's husband, her three young boys and her mother are struggling to adjust to their new situation when an unlikely ally enters their world in the form of an injured baby magpie they name Penguin. The bird's arrival is a welcome distraction for the Bloom family, eventually making a profound difference in the family's life.

This young readers' edition, adapted from the major Australian motion picture starring Naomi Watts, tells their story through the eyes of Noah, one of the three Bloom boys.

Chris Kunz is a writer, editor and publisher who works across the TV, film and publishing industries. She has written and script edited for children's television, and has worked at various publishing houses, where she has been an editor and children's publisher. Chris created, storylined and wrote bestselling children's series with the Irwin family and Australia Zoo, and the RSPCA for Random House Australia. She has an MA in Theatre Studies from UNSW.

Born in Sydney, Australia, Harry Cripps attended the Victorian College of Arts in Melbourne. After he graduated, he started creating, writing and directing plays in Melbourne and Sydney, and developing TV series for Fox Studios Australia.

His original comedy series, Supernova, aired on the BBC. He has written several Australian screenplays, including the children's film Paws, and co-wrote the animated feature The Magic Pudding. From 2012 to 2017 he was employed at Dreamworks Animation in Los Angeles, where he developed his own original screenplay Larrikins and collaborated on Kung Fu Panda 3. Most recently he won the Australian Writers Guild Award for Feature Film - Adaptation, for Penguin Bloom, which he co-wrote with Shaun Grant. In the same year he co-wrote the adaptation of The Dry for the big screen.

Based in Hollywood, he is currently directing his first animated feature Back To The Outback, for Netflix, which he also wrote and developed.