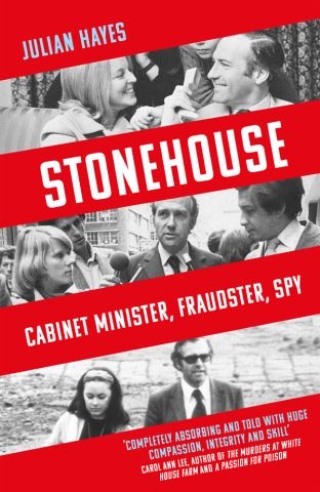 'Completely absorbing and told with huge compassion, integrity and skill'
CAROL ANN LEE, author of The Murders at White House Farm and A Passion For Poison

'What a book. I didn't have to turn the pages. They turned themselves I literally consumed the book in just a few hungry sittings . . . Julian Hayes is perfectly placed to tell this story, particularly it's captivating human side . . . most definitely a must read'
DR SALEYHA AHSAN, filmmaker and journalist, Cambridge

In November 1974, British MP and former cabinet minister John Stonehouse walked into the sea off a beach in Miami and disappeared, seemingly drowned.

Then he was found - on the other side of the world, in Australia - and his extraordinary story began to come to light: a Labour cabinet minister and a devoted family man; also in a long-term affair with his secretary, and a spy for the Czech State Security agency, who had committed fraud and attempted to fake his own death to escape catastrophic business failures.

Was it a mental breakdown as he later claimed? Or were there more sinister reasons for his dramatic disappearance?

This is the definitive biography of Stonehouse, written by Julian Hayes, who, as the son of Stonehouse's nephew and lawyer, Michael Hayes, is uniquely placed to tell the story of this charismatic but deeply flawed politician. As a criminal lawyer in London, Hayes has used his in-depth knowledge and experience of the criminal courts, not least the Old Bailey, where the Stonehouse trial took place, to forensically examine Stonehouse's story, including Czech defector Josef Frolík's claim that he was a spy.

Hayes has unearthed secret reports in the archives in Prague written by Stonehouse's former spymasters. He has also gleaned much from family members and lawyers involved in the trial and from the trial documents and other government papers held in archives in the UK and Australia.

Julian Hayes: JULIAN HAYES is a criminal and child-care lawyer with his firm, Berris Law, in London. He has undertaken many of the most high-profile and serious cases seen in the criminal courts of the last twenty years, most notably the 'Ricin Case' terrorist trial in 2005, the Graff jewellery robbery and most recently the Vietnamese lorry deaths case.