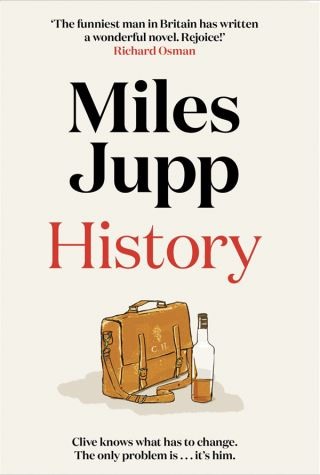 The hilarious, unmissable novel from the brilliant Miles Jupp

A satirical, tragicomic story about a man on the edge from actor and comedian Miles Jupp. For readers of Jonathan Coe, Mark Watson, Michael Frayn and David Nicholls.

Clive Hapgood is feeling stuck. The private school he teaches at is consuming his life, no thanks to wretched headteacher Julian Crouch. The gentle country life Clive envisaged has stifled him and left his marriage on the brink. What he needs is a holiday - something to remind him and Helen what life used to be like. But when things don't go to plan, and an incident at school begins to weigh heavy on his head, Clive's life starts to unravel in front of him. Has he got it in him to turn things around, whatever the cost? After all, it's his own time he's wasting...

Miles Jupp is an actor, comedian and writer. He played Nigel in the BAFTA winning sitcom REV, and John Duggan in Armando Iannucci's THE THICK OF IT, and has made multiple appearances on HAVE I GOT NEWS FOR YOU, MOCK THE WEEK and WOULD I LIE TO YOU? Film appearances include THE MONUMENTS MEN, directed by and starring George Clooney, Michael Winterbottom's THE LOOK OF LOVE and MADE IN DAGENHAM. Miles has appeared on the West End stage in NEVILLE'S ISLAND and at the National Theatre in BOTH RULES FOR LIVING and PEOPLE.
As well as writing and starring in the successful BBC Radio 4 sitcom IN AND OUT OF THE KITCHEN, in 2015 he also took over from Sandi Toksvig as host of THE NEWS QUIZ.