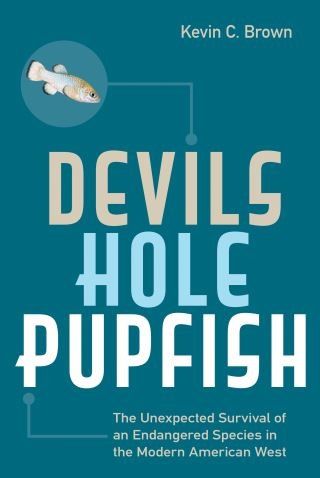 Cyprinodon diabolis, or Devils Hole pupfish: a one-inch-long, iridescent blue fish whose only natural habitat is a ten-by-sixty-foot pool near Death Valley, on the Nevada-California border. The rarest fish in the world.

As concern for the future of biodiversity mounts, Devils Hole Pupfish asks how a tiny blue fish—confined to a single, narrow aquifer on the edge of Death Valley National Park in Nevada’s Amargosa Desert—has managed to survive despite numerous grave threats.

For decades, the pupfish has been the subject of heated debate between environmentalists intent on protecting it from extinction and ranchers and developers in the region who need the aquifer’s water to support their livelihoods. Drawing on archival detective work, interviews, and a deep familiarity with the landscape of the surrounding Amargosa Desert, author Kevin C. Brown shows how the seemingly isolated Devils Hole pupfish has persisted through its relationships with some of the West’s most important institutions: federal land management policy, western water law, ecological sciences, and the administration of endangered-species legislation.

The history of this entanglement between people and the pupfish makes its story unique. The species was singled out for protection by the National Park Service, made one of the first “listed” endangered species, and became one of the first controversial animals of the modern environmental era, with one bumper sticker circulating in Nevada in the early 1970s reading “Save the Pupfish,” while another read “Kill the Pupfish.”

But the story of the pupfish should be considered for more than its peculiarity.  Moreover, Devils Hole Pupfish explores the pupfish’s journey through modern American history and offers lessons for anyone looking to better understand the politics of water in southern Nevada, the operation of the Endangered Species Act, or the science surrounding desert ecosystems.