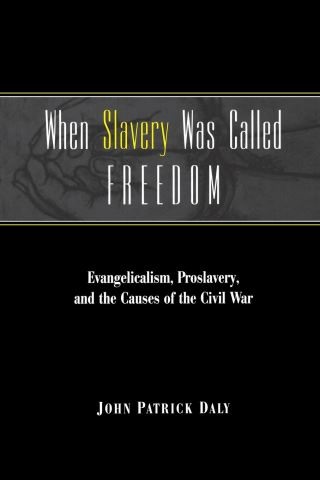 When Slavery Was Called Freedom

Evangelicalism, Proslavery, and the Causes of the Civil War

When Slavery Was Called Freedom uncovers the cultural and ideological bonds linking the combatants in the Civil War era and boldly reinterprets the intellectual foundations of secession. John Patrick Daly dissects the evangelical defense of slavery at the heart of the nineteenth century's sectional crisis. He brings a new understanding to the role of religion in the Old South and the ways in which religion was used in the Confederacy.

Southern evangelicals argued that their unique region was destined for greatness, and their rhetoric gave expression and a degree of coherence to the grassroots assumptions of the South. The North and South shared assumptions about freedom, prosperity, and morality. For a hundred years after the Civil War, politicians and historians emphasized the South's alleged departures from national ideals. Recent studies have concluded, however, that the South was firmly rooted in mainstream moral, intellectual, and socio-economic developments and sought to compete with the North in a contemporary spirit.

Daly argues that antislavery and proslavery emerged from the same evangelical roots; both Northerners and Southerners interpreted the Bible and Christian moral dictates in light of individualism and free market economics. When the abolitionist's moral critique of slavery arose after 1830, Southern evangelicals answered the charges with the strident self-assurance of recent converts. They went on to articulate how slavery fit into the "genius of the American system" and how slavery was only right as part of that system.