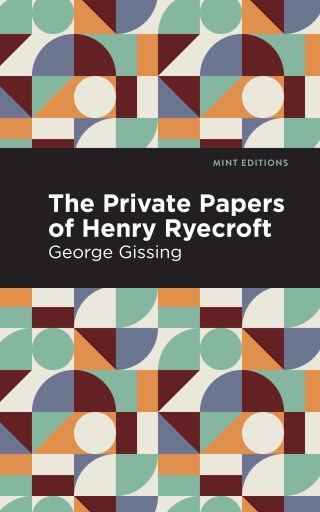 The Private Papers of Henry Ryecroft

The Private Papers of Henry Ryecroft (1903) is a semi-autobiographical work by George Gissing. Published in the last year of his life, The Private Papers of Henry Ryecroft is presented as a diary of a friend discovered after the man’s premature death. Divided into four seasons, the diary details the life of a man overwhelmed with depression and regretful of a past mired in unsuccessful work. With a mournful, meditative preface, George Gissing introduces Henry Ryecroft to the world. Uncelebrated in death, unknown in life, Ryecroft was a writer of ambition and talent who struggled for years to overcome the indecency of poverty and the disdain of the critical establishment. At the height of his struggle, nearing fifty years of age, Ryecroft unexpectedly inherits a small fortune, allowing him to retire to a cottage and to live comfortably for the first time in his life. With this newfound sense of calm and financial security, Ryecroft dedicates himself to the leisure of nature walks and to the freedom of diary writing. In these pages, he looks back on a life of toil with a mind molded through misery and curiosity to comment on aspects of the human experience both common and unique. Denied success in life, his voice soars for the patient, attentive reader with whom he shares his triumphs as well as his failures, his secrets and his often surprising, always relatable insights. Through the character of Henry Ryecroft, Gissing finds a way to bare his soul, to look back on his life as one with nothing left to lose and nothing more to gain—in other words, as a man set free. With a beautifully designed cover and professionally typeset manuscript, this edition of George Gissing’s The Private Papers of Henry Ryecroft is a classic work of English literature reimagined for modern readers.

George Gissing (1857-1903) was an English novelist. Born in Yorkshire, he excelled as a student from a young age, earning a scholarship to Owens College where he won prizes for his poetry and academic writing. Expelled and arrested for a series of thefts in 1876, Gissing was forced to leave England for the United States, teaching classics and working as a short story writer in Massachusetts and Chicago. The following year, he returned to England and embarked on a career as a professional novelist, publishing works of naturalism inspired by his experience of poverty and the works of Charles Dickens. After going through an acrimonious divorce, Gissing remarried in 1891 and entered a turbulent relationship with Edith Alice Underwood, with whom he raised two children before separating in 1897. During this time, after writing several unpublished novels, Gissing found success with New Grub Street (1891), Born in Exile (1892), and The Odd Women (1893). In the last years of his life, Gissing befriended H.G. Wells and travelled throughout Italy, Germany, and France, where he died after falling ill during a winter walk.