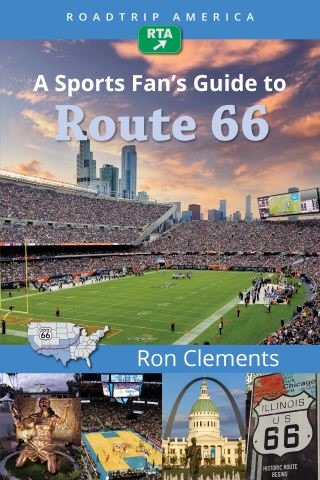 Get Your Balls, Bats, and Sticks on Route 66!

Immortalized in countless books, songs, and movies, Route 66 is a timeless icon of American culture. Until now, however, no guide to this historic byway has focused on another beloved part of American culture: sports. That all changes with RoadTrip America: A Sports Fan's Guide to Route 66. In this groundbreaking new book, sports writer and lifelong sports fan Ron Clements goes beyond nostalgic buildings and classic cars to highlight historic sports venues, storied sports professionals, and current sports events along the Mother Road.

Rolling 301 miles through Illinois, Route 66 is dotted with small towns that embrace their Mother Road heritage. In addition to NFL, NBA, NHL, and MLB teams, you'll find auto and horse racing tracks and a magnificent lineup of high school and collegiate sports programs to check out along the way.

The Missouri stretch of Route 66 has a little bit of everything for sports fans. Professional teams, a pair of NCAA Division I universities, multiple D-II schools, elite high school teams, and a handful of golf courses are just the beginning.

Take a trip back in time on the 13-mile non-Interstate stretch of Route 66 through the small towns of Galena, Riverton, and Baxter Springs. All three towns inspired characters and settings in the 2006 Disney Pixar film Cars. They also have high schools with competitive teams, especially on the diamond.

Oklahoma is home to many sports legends who have roots on Route 66. Towns along the Mother Road boast baseball hall of famers, football stars, Olympic medalists, and one superstar who won the most enduring foot race of all time. Oklahoma is also home to an NBA team, a Triple-A baseball club, and--perhaps surprisingly--thriving rugby and rowing scenes.

We all know the movies and television shows about Texas high-school football. Route 66 travelers can experience it for themselves while traveling from Shamrock to Adrian. Discover high-scoring six-man football and a unique golf course with sand greens in McLean. Amarillo has successful minor league baseball and hockey teams in addition to a thriving high school sports scene. And check out one of the nation’s biggest rodeos!

Rodeo is an especially big deal in the Land of Enchantment. Soccer and basketball are two other extremely popular sports in New Mexico, where you’ll also find an iconic college basketball venue and one of America’s best sports bars.

The Arizona segment of Route 66 begins and ends in the desert, but between Holbrook and Oatman, you'll discover pine-covered mountains, an NCAA Division I university, multiple rodeo venues, an elite ski resort, and dynastic high school cross-country, wrestling, and football programs.

Ron Clements: Ron Clements is a Wisconsin native and Green Bay Packers fan who married a Chicago Bears fan from Peoria, Illinois. Despite the rivalry, Ron and Patti make it work and have been living fulltime in an RV since March, 2018. They travel the country in search of new adventures and love attending baseball games and exploring national parks. They visited all 30 MLB stadiums in 2018 and have taken their RV to each of the lower 48 states. Ron is a veteran journalist of more than two decades and a summa cum laude graduate of East Carolina University, which he attended following his service in the United States Marine Corps. Ron has written for USA Today, Sporting News, CBS Sports, the Pittsburgh Post-Gazette, Omaha World Herald, The Philadelphia Inquirer, The Fresno Bee, the Montgomery Advertiser, and many other media outlets. Ron and Patti have two adult sons, RJ and David, and a four-legged travel companion named Maverick. While Ron's home base is in Florida, he is on the road in his RV twelve months a year.|||RoadTripAmerica's Mission is to provide advice, inspiration and resources for planning road trips in North America. The Trip Advice forum is a virtual meeting place for travelers from around the globe. Our authors, seasoned roadtrippers all, provide road-tested advice and inspiration for routes from New Brunswick to California and Alaska to Mexico. The Scenic Side Trip series provides insider tips for exploring two-lane byways adjacent to Interstate Highways.