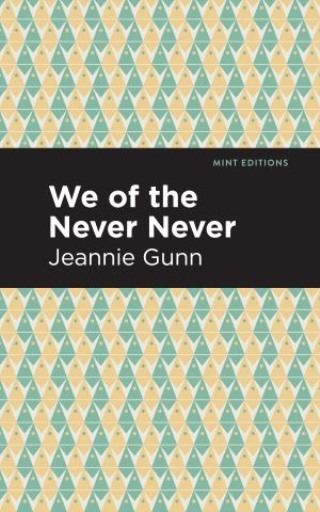 We of the Never Never

We of the Never Never (1908) is an autobiographical novel by Jeannie Gunn. Based on her experience accompanying her husband Aeneas to the remote cattle station of Elsey, Gunn’s novel is a fascinating masterpiece of Australian literature that explores the landscape of the continent’s Northern Territory while depicting the tense relationship between white settlers and the Aboriginal people they displaced. Sympathetic and utterly human, Gunn’s voice is a testament to her bravery as the first woman to settle in the Mataranka area, where she lived for just over a year until her husband’s tragic death from malaria. “To begin somewhere near the beginning, the Măluka—better known at that time as the new Boss for the Elsey—and I, his ‘missus,’ were at Darwin, in the Northern Territory, waiting for the train that was to take us just as far as it could—one hundred and fifty miles—on our way to the Never-Never. It was out of town just then, up-country somewhere, billabonging in true bush-whacker style, but was expected to return in a day or two, when it would be at our service.” Determined to follow her husband wherever he goes, “little Missus” braves the harsh trek to the distant cattle station where he has been appointed overseer. Over hundreds of miles on horseback, they observe for the first time the natural beauty of some of the wildest landscapes on Earth. Although the local cattle drovers are initially wary of her presence, the narrator proves herself as a courageous and hardworking woman, a friend of settlers and Aboriginal people alike. With a beautifully designed cover and professionally typeset manuscript, this edition of Jeannie Gunn’s We of the Never Never is a classic work of Australian literature reimagined for modern readers.

Jeannie Gunn (1870-1961) was an Australian novelist and teacher. Born in Melbourne, Gunn was the daughter of a Baptist minister and newspaperman. Educated alongside her sisters, she attended Melbourne University and ran a school for seven years upon graduating. In 1902, after marrying explorer Aeneas James Gunn, she traveled to the Northern Territory, eventually settling at the cattle station of Elsey. Following Aeneas’ death from malaria, she returned to Melbourne and embarked on her career as a writer. Her second novel, We of the Never Never (1908), is an autobiographical work which earned her a reputation as a leading figure in twentieth century Australian literature. The final decades of her life were spent in service to returning serviceman through the Monbulk RSL, a charity organization. In 1939, she was appointed an Officer of the Order of the British Empire for her work.