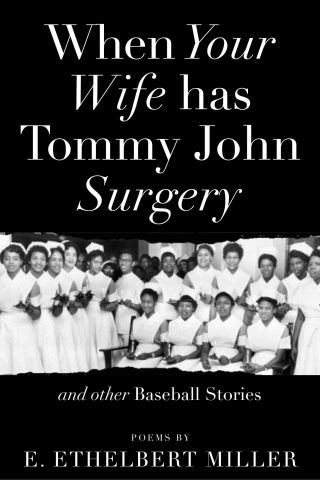 When Your Wife Has Tommy John Surgery and Other Baseball Stories

Much-honored Washington, D.C. poet activist E. Ethelbert Miller delights and surprises us with his deft imaginings and portraits. Ethelbert’s poems play out in baseball rhythm and express the joy of living, despite the bitter challenges in today’s world. These poems define our time and allow us to see ourselves as human through the lens of baseball, family and music.

When Your Wife Has Tommy John Surgery and Other Baseball Stories is Miller's second book of baseball poems. Here he touches new bases. There are poems about Marcel Duchamp and Ornette Coleman as well as Whitey Ford and Don Larsen.  Miller's poems move the outdoor game indoors where there are moments of disappointment and despair. Baseball can be a blues game. Tommy John surgery is a way of holding onto hope. Many of these poems were written during the Covid pandemic. They beckon fans back to the ballpark. They remind us to enjoy a game that is precious  and maybe even essential to our wellness. Coming after If God Invented Baseball, Miller seems to emerge from a literary dugout after a brief rain delay, ready to celebrate the American pastime again.

E. Ethelbert Miller: E. Ethelbert Miller is a writer and literary activist. He is the author of two memoirs and several books of poetry including The Collected Poems of E. Ethelbert Miller, a comprehensive collection that represents over 40 years of his work. For 17 years Miller served as the editor of Poet Lore, the oldest poetry magazine published in the United States. His poetry has been translated into nearly a dozen languages. Miller is a two-time Fulbright Senior Specialist Program Fellow to Israel. He holds an honorary degree of Doctor of Literature from Emory and Henry College and has taught at several universities.

Miller is host of the weekly WPFW morning radio show On the Margin with E. Ethelbert Miller and host and producer of The Scholars on UDC-TV. In recent years, Miller has been inducted into the 2015 Washington DC Hall of Fame and awarded the 2016 AWP George Garret Award for Outstanding Community Service in Literature and the 2016 DC Mayor's Arts Award for Distinguished Honor. In 2018, he was inducted into Gamma Xi Phi and appointed as an ambassador for the Authors Guild. He was awarded a 2020 grant by the D.C. Commission on the Arts and Humanities. Miller’s most recent book If God Invented Baseball, published by City Point Press, was awarded the 2019 Literary Award for poetry by the Black Caucus of the American Library Association.