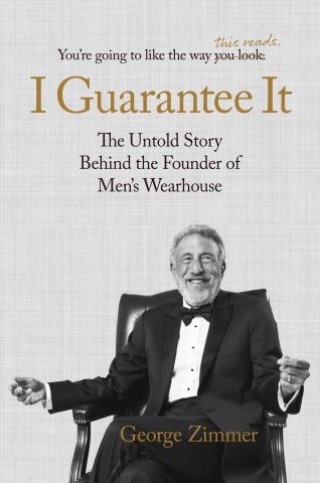 The Untold Story behind the Founder of Men's Wearhouse

America knew George Zimmer for one of the most famous slogans in television advertising history: “I guarantee it.” Zimmer rode his promise to lead the Men’s Wearhouse to unimagined success as a retail giant. Now, years removed from his stunning dismissal as leader of the company he founded, I Guarantee It recounts the journey of Zimmer’s rise, the fall of the Men’s Wearhouse, and his personal renewal.

For forty-one years, George Zimmer forged a relationship with American men who wanted to like the way they looked without getting too fussy about it.

He made them a promise that came straight from the shoulder: “I guarantee it,” he said, and it was ironclad. By the millions, customers walked into The Men’s Wearhouse stores in all fifty states and Canada, where they received “quality, service, and a good price,” where they bought suits, ties, sports coats, and slacks by the tens of billions of dollars.

Then a backstabbing — the handpicked board of directors fired Zimmer from the company he had created and developed into the most successful men’s specialty store in world history.

Eight years later, Zimmer is back to tell his story: a man raised by a prosperous and loving family, a fun-loving son of the sixties, a merchant, an entrepreneur, a pitchman for the ages.

Zimmer’s ouster devastated but did not destroy him. His is a story of hard work and resilience, about a life in business that succeeded beyond belief and followed the Golden Rule. It’s a story that will teach and inspire.

George Zimmer: George Zimmer was the founder of The Men’s Wearhouse clothing chain and CEO, board chair, and television spokesperson for the company for forty-one years. Under Zimmer, The Men’s Wearhouse became the largest men’s specialty chain in history with his famous slogan, “You’re going to like the way you look. I guarantee it.”

Zimmer was raised in Scarsdale, New York, where he showed an early aptitude for business, becoming a circulation manager for a local newspaper when he was still in high school, and later attending college at Washington University where he earned a bachelor’s degree in economics. Mr. Zimmer also played a crucial role as a pioneer and major financial contributor to California’s Proposition 215 in 1996, the first successful statewide medicinal marijuana campaign in the United States.

He lives in Oakland, California, where his primary philanthropic work is focused on the Oakland Zoo.