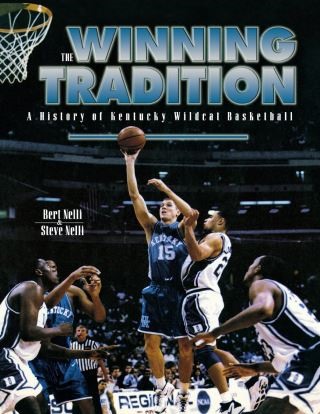 A History of Kentucky Wildcat Basketball

In its 95-year history, the Kentucky Wildcats have won more games than any other college basketball team. Their winning percentage is the highest in the country. They share the record for the most 20-win seasons. They are second in all-time number one rankings. And despite no longer holding the record for winningest coach, Adolph Rupp will always be a giant in the pantheon of college basketball.

When The Winning Tradition first appeared in 1984, it was the first complete history of the Wildcat basketball program. Bert Nelli pointed out that, contrary to the accepted mythology, Adolph Rupp arrived at a program already strong and storied. Nor did Rupp bring an entirely new style of play to the Bluegrass. Instead he adopted—and perfected—that of his predecessor, John Mauer. What Rupp did bring was an ability to charm the news media and a fierce determination to turn out winning teams, making him the undisputed "Baron of Basketball."

This new and expanded edition of The Winning Tradition brings the history of Kentucky basketball up to date. Nelli and his son Steve turn the same unflinching gaze that characterized the honesty of the first edition on the scandals that marred Eddie Sutton's tenure, the return to glory under Rick Pitino, and a full accounting of Tubby Smith's history-making first year.

The start of basketball season is welcomed in the Bluegrass with an unmatched enthusiasm and intensity. Each year brings a new team, new stars, and new glory. Other books have documented individual seasons, individual players, or individual coaches. But The Winning Tradition remains the only complete and authoritative history of the most celebrated college basketball program in the world.

A book no fan can afford to be without, The Winning Tradition brings alive the agonies, frustrations, and glories of each season of Kentucky basketball, from the first team (fielded by women) to the surprising victory in the 1998 NCAA tournament.