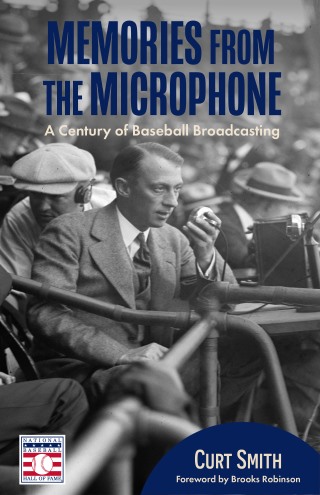 Memories from the Microphone

Voices of the Game

Curt Smith is “…the voice of authority on baseball broadcasting.” —USA Today

In this second in a series of Baseball Hall of Fame books, celebrate the larger-than-life role played by radio and TV baseball announcers in enhancing the pleasure of our national pastime.

Commemorate the 100th anniversary of baseball broadcasting. The first baseball game ever broadcast on radio was on August 5, 1921 by Harold Wampler Arlin, a part-time baseball announcer on Pittsburgh’s KDKA, America’s first commercially licensed radio station. The Pirates defeated the Phillies 8-5.

An insider’s view of baseball. Now you can own Memories from the Microphone and experience baseball from author Curt Smith. He has spent much of his life covering baseball radio and TV, and previously authored baseball books including the classic Voices of The Game.

Relive baseball’s storied past through the eyes of famed baseball announcers. Organized chronologically, Memories from the Microphone charts the history of baseball broadcasting. Enjoy celebrated stories and personalities that have shaped the game—from Mel Allen to Harry Caray, Vin Scully to Joe Morgan, Ernie Harwell to Red Barber.

Also read the first in the series of Baseball Hall of Fame books Picturing America’s Pastime.

Curt Smith is a prolific author and baseball’s leading radio/television historian who wrote more speeches than anyone for former President George H.W. Bush—The New York Times terming his work “the high point of Bush familial eloquence.” USA Today calls him “the voice of authority on baseball broadcasting.” To Chicago Cubs announcer Pat Hughes, Smith is “simply one of the best baseball historians, ever.” Memories From the Mike: A Century of Baseball Broadcasting is his eighteenth book.

In 1998, Smith joined the University of Rochester faculty as Senior Lecturer of English. He teaches Public Speaking using video, text, and lecture, and Presidential Rhetoric, etching how U.S. presidents from Calvin Coolidge to Joe Biden communicated through language and delivery. He is also a Gannett News Service columnist, analyzing politics, culture, and sport through what pollster John Zogby calls “his mastery of language.”

In 1992, Smith released the updated version of Voices of The Game, the history of baseball radio/TV that Publisher’s Weekly called “monumental.” It became a Smithsonian Institution series that The Washington Post styled “a mesmerizing memory lane” and then highly-rated three-part 1994-95 ESPN TV series. Since then, Smith has hosted other Smithsonian, National Baseball Hall of Fame and Museum, XM Satellite Radio, and a decade-long National Public Radio Upstate New York series Perspectives, named by Associated Press “Best in New York State.”

Smith’s most recent book is The Presidents and the Pastime. Others include Pull Up a Chair: The Vin Scully Story; George H.W. Bush; A Talk in the Park; What Baseball Means to Me; Windows on the White House; and Mercy!, a tribute to Fenway Park. He has contributed to the Cambridge Companion to Baseball, the National Museum of American Jewish History’s Chasing Dreams, and more than a dozen volumes of the Society of American Baseball Research—and addressed, among others, the White House Historical Association, Cooperstown Symposium on Baseball and American Culture, and Great Fenway Writers Series.

Born and raised in Upstate New York, the State University of New York at Geneseo graduate was elected in 1993 to the Judson Welliver Society of former White House speechwriters. Smith is a member of the Baseball Hall of Fame’s Ford C. Frick Award broadcast committee and the National Radio Hall of Fame steering committee. He lives with his wife Sarah and two children in Upstate New York.