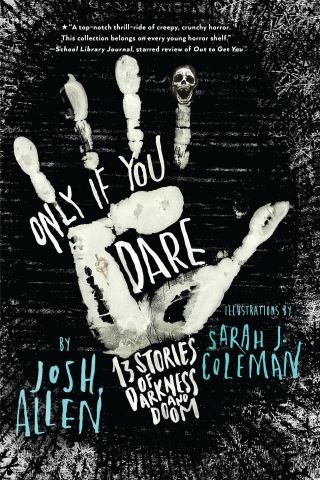 Only If You Dare

13 Stories of Darkness and Doom

Thirteen chilling short stories to keep you up at night--but only if you dare.

You never know what's out to get you. Though you might think you're safe from monsters and menaces, everyday objects can turn against you, too. A mysterious microwave. A threatening board game. A snowman that refuses to melt. Even your own heartbeat has its secrets. Thu-thump. Thu-thump. When you stop to listen, each beat sounds more menacing than the last.

Master storyteller Josh Allen brings thirteen nightmare scenarios to life in this page-turning collection that's perfect for budding horror junkies. In his wondrous world, danger waits behind every doorway . . . even in the most ordinary places.

Josh Allen: Josh Allen checks under his bed before switching off the light each night. During the day, he teaches creative writing and literature at Brigham Young University-Idaho. His debut book for young readers, Out to Get You, received two starred reviews and was a Junior Library Guild selection. He lives in Idaho with his family.

Sarah Coleman was an early pioneer of hand lettering and has illustrated covers for many renowned books, including the 50th anniversary edition of To Kill a Mockingbird and Newbery Honor-winner Wolf Hollow. Her design clients range from Coca Cola and Starbucks to The New York Times. She lives in the UK.