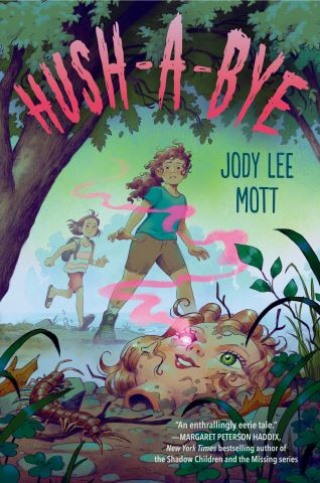 A delightfully creepy story perfect for the middle school set! Hush-a-Bye is an old, broken doll found by Lucy and her sister in the woods. It seems to possess extraordinary powers, but will it use them for good or evil?

Like most kids with younger siblings, Lucy loves her sister Antonia, but is all too frequently annoyed with her as well. The two spend most of their time together since their mother works so hard, but without friends Lucy can't help but feel lonely anyway. She's always tried to ignore the bullying and teasing at school about her family being poor--it's always best to keep her head down and do nothing.

When the girls find an old, muddy doll head in the river, Antonia claims it as her newest treasure. At night Lucy hears her talking to Hush-a-Bye--and does she hear the doll talking back? Soon, Hush-a-Bye seems to be protecting Antonia by making bad things happen to others, and it isn't long before Lucy asks for its help against her tormentors, too. Slowly Hush-a-Bye's influence forms a wedge between the sisters, and Antonia's dependence on it becomes frightening. The doll has a mind of its own, and soon it will have Antonia's as well. Can Lucy solve the mystery of Hush-a-Bye to stop its evil plans?

Jody Lee Mott: Jody Lee Mott is a former elementary and middle school teacher, and an avid reader of children's books who finally decided to write down the stories bouncing around his brain. He is also the creator and host of the children's book podcast Dream Gardens, which is on Stitcher, Spotify, and wherever podcasts are found. He lives several stone throws from the Susquehanna River in Apalachin, New York with his wife, children and one very large greyhound. Hush-a-Bye is his first novel. Find him at jodyleemott.com.