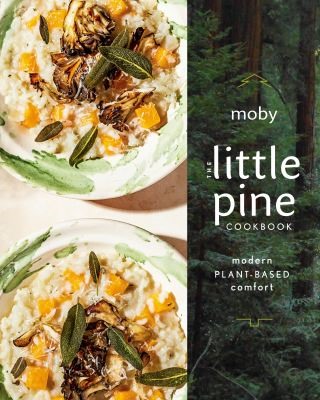 Moby became vegan more than thirty years ago, when few people knew how to pronounce the word. Since then, vegan cuisine has flourished as the fastest-growing and most innovative cuisine on the planet. As a passionate animal rights advocate and also a food lover, Moby has helped fuel this evolution at his wildly popular restaurants. He is the original owner of the L.A. celebrity hotspot Little Pine, which showcases an elevated menu proving once and for all that vegan food is “all grown up” and the most delicious way to be eating today.

Now Moby takes readers inside this special corner of Southern California with The Little Pine Cookbook, a collection of 125 recipes inspired by the restaurant's beloved dishes. Gateway recipes like Panko-Crusted Piccata will wow even the hardest-to-please meat lovers. And veg-forward small plates like Fried Cauliflower with Kimchi Aioli and go-to pastas like Orecchiette with Braised Leeks, Asparagus & English Peas will become back-pocket staples, no matter your diet. And didn’t you know that desserts are healthier when they are vegan? Indulge in the simple pleasure of Butterscotch Pudding or the rich decadence of Chocolate Bread Pudding while feeling good about yourself and your contribution to a better planet. Whatever you’re making, the spirit of Little Pine—of community, of sharing, and of giving—is in all these recipes, and they are here for you to savor every day.

Moby: Moby is a musician, entrepreneur, activist, and philanthropist who is informally known as “the godfather of veganism.” His album Play sold more than 10 million copies worldwide. He’s released fourteen solo albums in total. A serial side hustler, Moby opened the vegan restaurant Teany in New York City in 2002 and is the original owner of Little Pine, a unique, contemporary vegan restaurant in the Silver Lake neighborhood of Los Angeles.