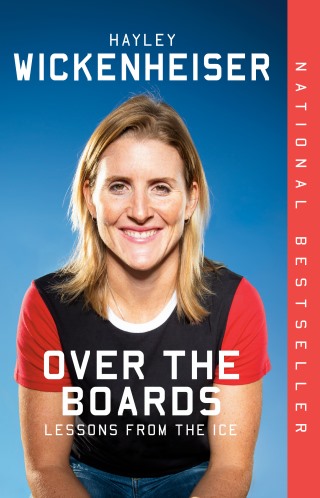 Lessons from the Ice

“Hayley Wickenheiser is an incredible human being . . . this is what a billion hours of hard work looks like.”
—Ryan Reynolds

The greatest women’s hockey player of all time, Hayley Wickenheiser shares the lessons that won her four Olympic gold medals, and hard-earned wisdom distilled from moments when she fell short.

There is no one in the world like Hayley Wickenheiser.

13 World Championship appearances. 6 Olympic Games. Hockey Hall of Famer. All while raising a child, earning multiple university degrees, and not benefiting from the financial stability male professional athletes have. She gave the game everything she had—now, Hayley shares what the game gave her.

From motherhood to pro leagues to her new career in medicine, Hayley shares the hard-won lessons she learned on and off the ice that helped her not only have a record-breaking hockey career but craft a life filled with joy, growth, and challenges. In her own words, Hayley shares how she rose from the backyard pond and changing in boiler rooms (because girls' dressing rooms didn’t exist) to Olympic MVP (twice). How becoming a parent made her a better athlete. How she learned to thrive under monumental pressure. But she doesn’t stop at revealing the pillars to her tremendous success—Hayley delves into her immense failures and how she grew from them. Like Kobe Bryant, Tom Brady, and Abby Wambach before her, Hayley shares her wisdom through personal stories of triumph, relentlessness, and more than a couple confrontations. Told with humour, compassion, and steadfast optimism, Hayley’s practical advice, coaching, and invaluable perspective inspires readers to never accept “that’s not the way we do things” or “that hasn’t been done before” as limitations. An empowering and pragmatic guide, Hayley encourages readers to not follow in her footsteps, but to carve their own ice.

Hayley Wickenheiser: HAYLEY WICKENHEISER is regarded as one of the best female hockey players in the world. She has represented Canada at numerous World Championships and made six Olympic appearances (both summer and winter), bringing home four Olympic gold medals. Off the ice, she has picked up numerous additional accomplishments, such as Olympic and Hockey Hall of Fame inductee, accomplished public speaker, and Founder of world-renowned Canadian Tire WickFest. She is currently the Assistant General Manager, Player Development for the Toronto Maple Leafs and a medical doctor.