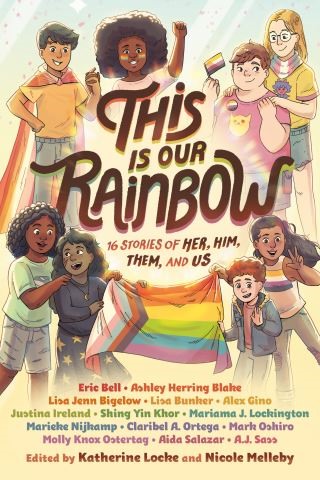 This Is Our Rainbow

The first LGBTQA+ anthology for middle-graders featuring stories for every letter of the acronym, including realistic, fantasy, and sci-fi stories by authors like Justina Ireland, Marieke Nijkamp, Alex Gino, and more!

A boyband fandom becomes a conduit to coming out. A former bully becomes a first-kiss prospect. One nonbinary kid searches for an inclusive athletic community after quitting gymnastics. Another nonbinary kid, who happens to be a pirate, makes a wish that comes true--but not how they thought it would. A tween girl navigates a crush on her friend's mom. A young witch turns herself into a puppy to win over a new neighbor. A trans girl empowers her online bestie to come out.