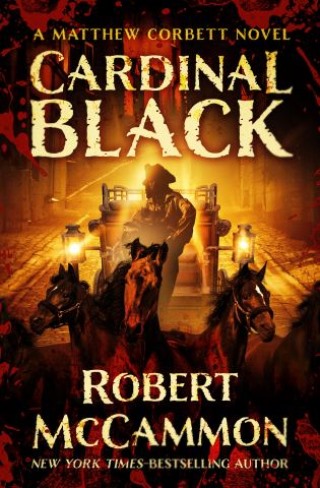 The year is 1703. The woman Matthew Corbett loves is rapidly deteriorating. A drug forced on her by criminal mastermind Professor Fell has destroyed her sanity. And the one thing that could save her—a book of potions—was stolen during an assault on the English village where she has been living under another name, an attack directed by a deranged man known as Cardinal Black.

Matthew is a professional problem solver employed by an agency in New York, but this case is personal. To save Berry Grigsby, Matthew will journey to London with one of Fell’s henchmen and attend an auction to which Black has summoned unsavory characters from near and far—all vying to possess the powerful volume. But before Matthew can obtain the book and heal Berry, he must survive Cardinal Black . . .

The “most intense yet” in the unique series that began with Speaks the Nightbird, Cardinal Black is a brutal and brilliant historical thriller from this New York Times–bestselling and Bram Stoker Award–winning author (The Florida Times-Union).

“Excellent . . . full of tension and suspense.” —Stephen King on Speaks the Nightbird

“Told with matchless insight into the human soul . . . deeply satisfying.” —Sandra Brown on Speaks the Nightbird

“The Corbett novels are rich, atmospheric stories, the kind of historical mystery that makes the reader feel as though he really has stepped back in time. Matthew is a very well designed character, very much a man of his time but also ahead of his time, as though he has stepped out of a modern-day crime lab into the early eighteenth century.” —Booklist