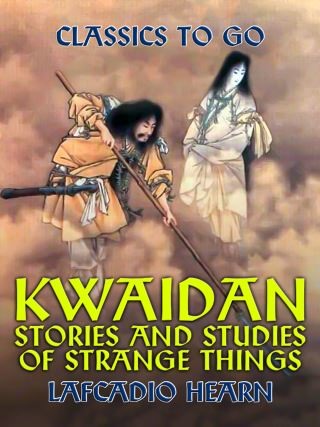 A blind musician with amazing talent is called upon to perform for the dead. Faceless creatures haunt an unwary traveler. A beautiful woman — the personification of winter at its cruelest — ruthlessly kills unsuspecting mortals. These and 17 other chilling supernatural tales — based on legends, myths, and beliefs of ancient Japan — represent the very best of Lafcadio Hearn's literary style. They are also a culmination of his lifelong interest in the endlessly fascinating customs and tales of the country where he spent the last fourteen years of his life, translating into English the atmospheric stories he so avidly collected. Teeming with undead samurais, man-eating goblins, and other terrifying demons, these are 20 classic ghost stories. (Goodreads)

Lafcadio Hearn: Koizumi Yakumo (27 June 1850 – 26 September 1904), born Patrick Lafcadio Hearn, was a writer. He worked in the United States before moving to Japan and becoming Japanese. He was of Greek-Irish descent. He wrote about Japanese culture, especially his collections of legends and ghost stories, such as Kwaidan: Stories and Studies of Strange Things. In the United States, he is also known for his writings about New Orleans, based on his decade-long stay there.