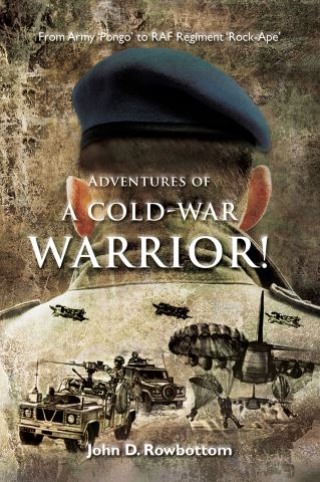 Adventures of a Cold-War Warrior!

This is a humorous – and at times, tongue-in-cheek – account of the author’s time in Her Majesty’s Armed Forces, from soldier to ‘rock ape’ (RAF Regiment), with a stint as a ‘penguin’ (steward) tucked in between.
Covering the period from 1966 to 1976, when the Cold War was still in full swing, the book tells what went on behind the scenes that the recruiting posters and adverts would never show you. Prepare to laugh, smile, shake your head in disbelief at the strange and at times downright crazy goings-on, as the author and his pals jump from one crazy adventure to the next.
This is not a book for the faint-hearted or easily offended. These are real characters that the author met, though some of the names may have been changed, as they say in all the best films, ‘to protect the guilty’! When reading, the reader is experiencing for themselves what is happening along with the author.
To those who have never been in the forces and don’t know the mindset of the military mind and reasoning of one who serves his country, the characters in this book may come across as having a beer-drinking, girl-chasing, cavalier attitude. Not true – but when single and in our late teens/early twenties and a product of the times, we lived life to the full, not knowing if the Cold War would one day turn hot…

John D. Rowbottom: Up until joining the armed forces, the author of this book, John D. Rowbottom, had not had a spectacularly unusual upbringing. His grandfather had fought during the World War I and received the Military Medal for bravery at the Battle of the Somme where he was temporarily blinded. Fortunately, he survived the war – otherwise John wouldn’t be here to tell of it. John’s father was ex-military and was engaged through the World War II at one time as an R.A.F. policeman, with a spell in the newly formed R.A.F. Regiment. Throughout John’s childhood, his brother Martin and he were subjected to their father’s and grandfather’s adventures and exploits during the wars on an almost daily basis. So, it was probably inevitable that they joined the forces – first Martin, in the R.H.A. (Royal Horse Artillery), shortly followed by John himself into the R.C.T. (Royal Corps of Transport) at Houndstone Camp in Yeovil, Somerset. (The camp is now gone, replaced by the new Yeovil Town Football Club.) In those days, all members of the R.C.T., regardless of job, had to be able to drive a Land Rover and 4-tonne truck. John passed through the military basic training on a high but when it came to driver training, the army’s philosophy was: if you can drive a 4-tonner and pass your test, then it is easy to drive a Land Rover. He was probably the only one on the course who had never been behind a steering wheel in his life, and the first time sitting high up in the cab looking down on all and sundry filled him with dread and fear! Thus, he was never able to pass the driving test (though he did a few years later) because the nerves got the better of him. So, he left after a year. But bitten by the military bug, just had to join up again, so he joined the R.A.F. on 19 September 1967, in which he served nine years – firstly as a steward and later to remuster to the R.A.F. Regiment. His time up, he demobbed back to UK in August 1976. He was out about 2/3 years and had to do it all again but not full time now, but in the T.A. (Territorial Army), but that’s another story… ‘Come back, Capt. Mainwaring – all is forgiven!’