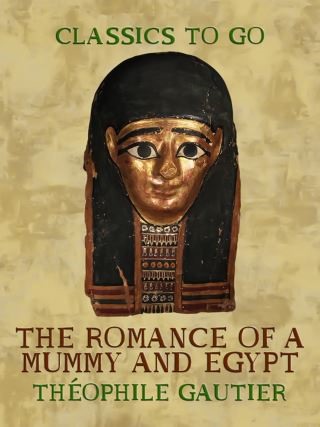 The Romance of a Mummy and Egypt

A historical novel set in Ancient Egypt, which features the Biblical Exodus. The mummy is a disturbing and exciting book, in which a beautiful love story, spent thousands of years ago in Thebes of the Pharaohs, is intertwined with the moment when the Jews left Egypt and the episode of crossing the Red Sea. (Goodreads)

Théophile Gautier: Pierre Jules Théophile Gautier; 30 August 1811 – 23 October 1872) was a French poet, dramatist, novelist, journalist, and art and literary critic. While an ardent defender of Romanticism, Gautier's work is difficult to classify and remains a point of reference for many subsequent literary traditions such as Parnassianism, Symbolism, Decadence and Modernism. He was widely esteemed by writers as disparate as Balzac, Baudelaire, the Goncourt brothers, Flaubert, Pound, Eliot, James, Proust and Wilde.