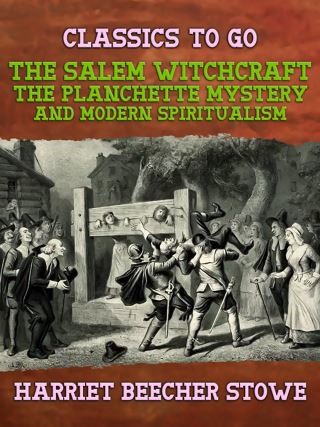 The Salem Witchcraft, the Planchette Mystery, and Modern Spiritualism

Excerpt: "The object in reprinting this most interesting review is simply to show the progress made in moral, intellectual, and physical science. The reader will go back with us to a time— not very remote — when nothing was known of Phrenology and Psychology; when men and women were persecuted, and even put to death, through the baldest ignorance and the most pitiable superstition. If we were to go back still farther, to the Holy Wars, we should find cities and nations drenched in human blood through religious bigotry and intolerance. Let us thank God that our lot is cast in a more fortunate age, when the light of revelation, rightly interpreted by the aid of science, points to the Source of all knowledge, all truth, all light. When we know more of Anatomy, Physiology, Physiognomy, and the Natural Sciences generally, there will be a spirit of broader liberality, religious tolerance, and individual freedom. Then all men will hold themselves accountable to God, rather than to popes, priests, or parsons. Our progenitors lived in a time that tried men's souls, as the following lucid review most painfully shows."

Harriet Beecher Stowe: Harriet Elisabeth Beecher Stowe (/stoʊ/; June 14, 1811 – July 1, 1896) was an American author and abolitionist. She came from the Beecher family, a famous religious family, and became best known for her novel Uncle Tom's Cabin (1852), which depicts the harsh conditions experienced by enslaved African Americans. The book reached an audience of millions as a novel and play, and became influential in the United States and in Great Britain, energizing anti-slavery forces in the American North, while provoking widespread anger in the South. Stowe wrote 30 books, including novels, three travel memoirs, and collections of articles and letters. She was influential both for her writings and for her public stances and debates on social issues of the day.