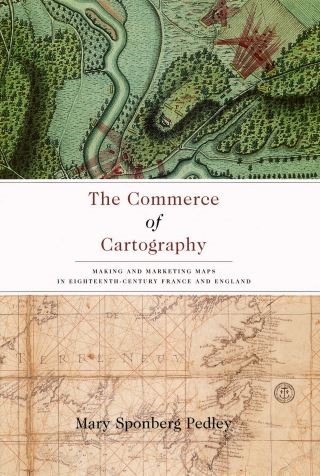 The Commerce of Cartography

Making and Marketing Maps in Eighteenth-Century France and England

Though the political and intellectual history of mapmaking in the eighteenth century is well established, the details of its commercial revolution have until now been widely scattered. In The Commerce of Cartography, Mary Pedley presents a vivid picture of the costs and profits of the mapmaking industry in England and France, and reveals how the economics of map trade affected the content and appearance of the maps themselves.

Conceptualizing the relationship between economics and cartography, Pedley traces the process of mapmaking from compilation, production, and marketing to consumption, reception, and criticism. In detailing the rise of commercial cartography, Pedley explores qualitative issues of mapmaking as well. Why, for instance, did eighteenth-century ideals of aesthetics override the modern values of accuracy and detail? And what, to an eighteenth-century mind and eye, qualified as a good map?

A thorough and engaging study of the business of cartography during the Enlightenment, The Commerce of Cartography charts a new cartographic landscape and will prove invaluable to scholars of economic history, historical geography, and the history of publishing.

Mary Sponberg Pedley:
Mary Sponberg Pedley is adjunct assistant curator of maps at the William L. Clements Library at the University of Michigan, a Latin instructor in the Ann Arbor Public School system, and the associate editor of Imago Mundi: The International Journal for the History of Cartography.