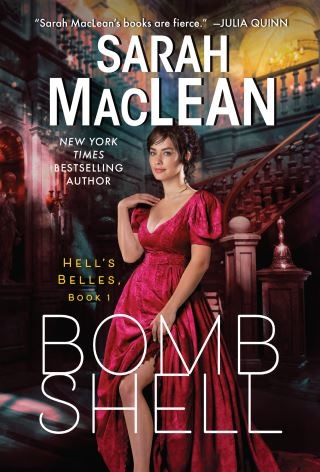 After years of living as London’s brightest scandal, Lady Sesily Talbot has embraced the reputation and the freedom that comes with the title. No one looks twice when she lures a gentleman into the dark gardens beyond a Mayfair ballroom…and no one realizes those trysts are not what they seem.

No one, that is, but Caleb Calhoun, who has spent years trying not to notice his best friend’s beautiful, brash, brilliant sister. If you ask him, he’s been a saint about it, considering the way she looks at him…and the way she talks to him…and the way she’d felt in his arms during their one ill-advised kiss.

Except someone has to keep Sesily from tumbling into trouble during her dangerous late-night escapades, and maybe close proximity is exactly what Caleb needs to get this infuriating, outrageous woman out of his system. But now Caleb is the one in trouble, because he’s fast realizing that Sesily isn’t for forgetting…she’s forever. And forever isn’t something he can risk.

New York Times, Washington Post & USA Today bestseller Sarah MacLean is the author of historical romance novels that have been translated into more than twenty languages.

Sarah is a leading advocate for the romance genre, speaking widely on its place at the nexus of gender and cultural studies. A romance columnist and co-host of the weekly romance novel podcast, Fated Mates, her work in support of romance and those who read it earned her a place on Jezebel.com's Sheroes list and led Entertainment Weekly to call her "the elegantly fuming, utterly intoxicating queen of historical romance."

Sarah is a graduate of Smith College & Harvard University. She lives in New York City.