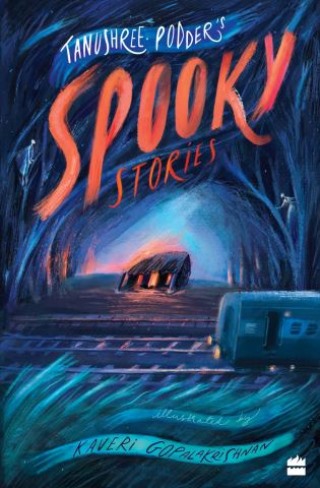 A writer's journey turns into a nightmare when he disembarks from the train to catch a thief and misses the train.

Anirudh is forced to spend the night in a tiny railway station with barely anyone in sight. A power failure adds to his woes. Guided by the flashlight on his phone, he finds his way to the waiting room. There, he finds thirteen chairs and a dozen passengers seated in the room. The next train is due at dawn, so they decide to pass time by swapping ghost stories...

Uncover the mysteries of an ancient Egyptian tomb, travel to the ruins of an old fort and meet the ghosts of China's Forbidden City in this unusual set of eerie, spine-tingling SPOOKY STORIES!

A well-known travel writer and novelist, Tanushree is passionate about travelling and writing. Climate change and the environment are of special interest to her. Tanushree enjoys writing in various genres. This has led to her writing in historical, military, crime, and paranormal genres for adults and children. She has written many non-fiction books before moving to fiction and has published 15 novels. Among her books are Nurjahan's Daughter, Boots Belts Berets, On the Double, Escape from Harem, Solo in Singapore, A Closetful of Skeletons, Before you Breathe, No Margin for Error, The Teenage Diary of Rani Laxmibai, The Girls in Green, Spooky Stories and An Invitation to Die. More Spooky Stories is her 16th book. Three of her books, Boots Belts Berets, A Closetful of Skeletons, and The Girls in Green, are being adapted into web series.