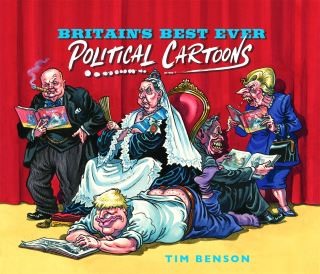 A rip-roaring collection of Britain's finest political satire, from Hogarth and Gillray to Martin Rowson, Steve Bell, Peter Brookes and Nicola Jennings. Between Waterloo and Brexit, cartoons have been Britain's most famous antidote to the chaos of public politics. Skewering the issues and characters that have dominated the news over three centuries, these cartoons have united those who love, and those who hate their politicians. A wild journey through the scandals that made a nation, this is the ultimate book of sketches which have stood the test of time.

Tim Benson: Dr Tim Benson is Britain's leading authority on political cartoons. He runs the Political Cartoon Gallery and Café which in Putney. He has produced numerous books on the history of cartoons, including Giles's War, Churchill in Caricature, Low and the Dictators, The Cartoon Century: Modern Britain through the Eyes of Its Cartoonists, Drawing the Curtain: The Cold War in Cartoons and Over the Top: A Cartoon History of Australia at War.