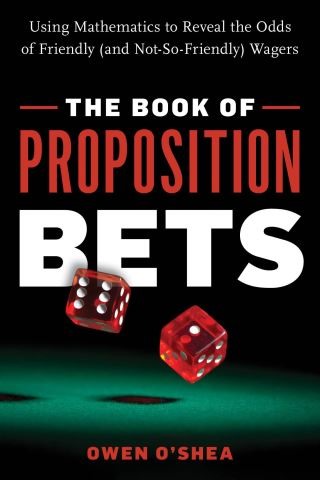 The Book of Proposition Bets

In the modern world the theory of probability is used extensively in mathematics, science, engineering, medicine and, of course, gambling. A proposition bet is one that involves the use of probability –both estimated and actual –where an individual makes an apparently attractive bet to someone who is easily deceived by the odds, which are at first glance in his favor.

The Book of Proposition Bets gathers together, and reveals the true mathematics behind, over 50 classic and original proposition bets. From the famous Three Card Monty (really an exercise in the Monty Hall Paradox), to probabilities based on rolling dice and pulling playing cards, or whether or not a mark can guess 3 correct digits of a one dollar bill’s serial number (spoiler: the odds are against it), author Owen O’Shea here compiles a fascinating and engaging survey of prop bets. In addition, Part 2 of the book contains a brief history of the theory of probability and some examples of cons and scams perpetrated on the general public to this day around the world, (plus a few more mathematical proposition bets!).

Whether to learn the intricacies used by hustlers, or borrow a couple of tricks for yourself, we wager that there is a high probability that readers will enjoy this entertaining and illuminating book!

Owen O'Shea is the author of Mathematical Brainteasers with Surprising Solutions and The Call of the Primes as well as articles in the Journal of Recreational Mathematics and EdgeScience. He lives in Ireland.