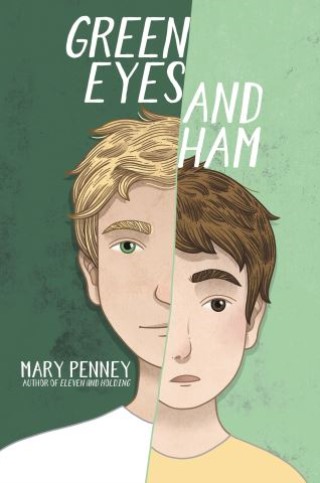 Acceptance, understanding, and hope shine through in this heartfelt coming of age story by Eleven and Holding author Mary Penney, perfect for fans of Lindsey Stoddard and Lisa Graff.

After a lifetime of being homeschooled, Ham Hudson is hoping that a new year in a new school will help make him a whole new Ham. Instead, he’s saddled with an archnemesis to avoid, a confusing and exhausting social sphere to navigate, and a whole host of insecurities to add to his old ones.

But then Ham meets Micah. Sympathetic and effortlessly cool, Micah quickly becomes a lifeline in a strange world. Ham wants Micah to think he belongs—to want him around as much as Ham wants to be around him.

The more that Ham tries to fit in, the less he recognizes himself. When things start to unravel, Ham has to decide—is fitting in worth changing who he wants to be?

Mary Penney thinks eleven-year-olds ought to be given special medals for surviving one of the toughest years of childhood. She feels certain she ate her body weight in peanut M&M’s that year just to cope. She says that when she was eleven-and-a-half, she began shape-shifting from a reasonable-looking child to an awkward creature with arms, legs, ears, and teeth all pointing in different directions. She wants you all to know that awkward stage passes eventually and very cool things happen next. Just hang on!

She is a US Army veteran and works full-time for the Department of Veteran Affairs. Mary lives in Santa Barbara with her four-legged children who love to sleep, play practical jokes, and throw up hairballs. Mary loves to swim (badly), practice yoga (stiffly), and walk (into lots of things). Despite all that, she is deeply grateful for all her Irish good luck, and especially for being able to write novels for kids.