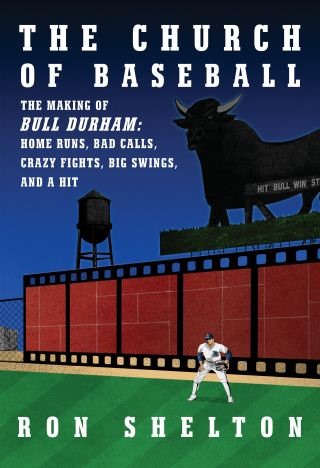 The Church of Baseball

From the award-winning screenwriter and director of cult classic Bull Durham, the extremely entertaining behind-the-scenes story of the making of the film, and an insightful primer on the art and business of moviemaking.

“This book tells you how to make a movie—the whole nine innings of it—out of nothing but sheer will.” —Tony Gilroy, writer/director of Michael Clayton and The Bourne Legacy

“The only church that truly feeds the soul, day in, day out, is the church of baseball.” —Annie in Bull Durham

Bull Durham, the breakthrough 1988 film about a minor league baseball team, is widely revered as the best sports movie of all time. But back in 1987, Ron Shelton was a first-time director and no one was willing to finance a movie about baseball—especially a story set in the minors. The jury was still out on Kevin Costner’s leading-man potential, while Susan Sarandon was already a has-been. There were doubts. But something miraculous happened, and The Church of Baseball attempts to capture why.

From organizing a baseball camp for the actors and rewriting key scenes while on set, to dealing with a short production schedule and overcoming the challenge of filming the sport, Shelton brings to life the making of this beloved American movie. Shelton explains the rarely revealed ins and outs of moviemaking, from a film’s inception and financing, screenwriting, casting, the nuts and bolts of directing, the postproduction process, and even through its release. But this is also a book about baseball and its singular romance in the world of sports. Shelton spent six years in the minor leagues before making this film, and his experiences resonate throughout this book.

Full of wry humor and insight, The Church of Baseball tells the remarkable story behind an iconic film.

Ron Shelton: RON SHELTON's Bull Durham launched a writing-directing career that includes White Men Can't Jump, Blaze (1989), Cobb, and Tin Cup, among other films. He also directed Jordan Rides the Bus, a documentary about Michael Jordan's year in the minor leagues. A former professional baseball player, he holds degrees from Westmont College and the University of Arizona. He currently lives in Los Angeles with his family.