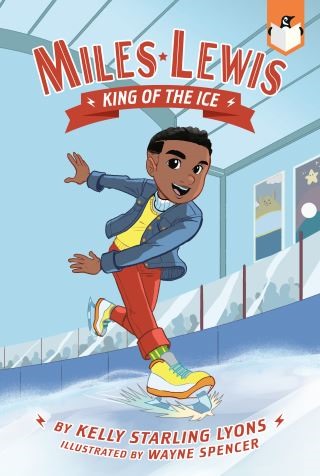 From the award-winning author of the Jada Jones chapter books comes an illustrated spinoff series perfect for STEM fans!

Miles Lewis loves science and sports. But when his teacher announces a class field trip to an ice skating rink to learn about physics, he isn't so excited. He's never ice skated before, and his friend RJ won't let him forget it. RJ even challenges him to a bet: If Miles skates without falling, RJ will put a “Miles is the man” sign on his backpack. But if Miles falls, he has to put one on his that says the same about RJ. Miles can barely focus on the bet, though, because he suspects his beloved Nana has plans to move out of his family's house—and that's just too much to bear. Can he keep his cool with all the pressure from RJ while finding a way to make his grandma stay?

Kelly Starling Lyons: Kelly Starling Lyons (she/her) is the award-winning author of the Jada Jones and Ty's Travels series and picture books including Sing a Song: How "Lift Every Voice & Sing" Inspired Generations and Hope's Gift. She lives in North Carolina. Find out more at www.kellystarlinglyons.com

Wayne C. Spencer (he/him) is a cartoonist, illustrator, and dinosaur enthusiast. He graduated from the Savannah College of Art and Design, where he nurtured an abiding compulsion to draw characters, and tell stories about them. Originally from North Carolina, he currently lives in Florida with two powerful daughters, and a mighty wife.