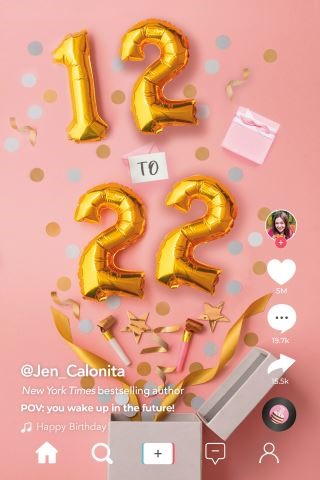 POV You Wake Up in the Future!

A smart and funny modern day 13 Going on 30 from New York Times bestselling author Jen Calonita! A tween girl finds out it is like to be 22 when she jumps in time with the help of a mysterious TikTok filter.

Turning 12 1/2 shouldn't be the most exciting birthday in the world. It's a half birthday after all. But Harper is thrilled because she is getting the biggest gift of all: her parent's approval to finally get social media accounts.

Except when she goes to post her first photo, there is a filter she has never heard of before. One that shows you what you will look like when you are older. Curious, Harper clicks on it...but ends up flash forwarding in time to when she is 22.

She will quickly find that being in her twenties means the freedom she always wanted, money for the glow up she didn't know she needed and working for her idol! But Harper soon discovers a lot more has changed than she expected—including the person she wants to be. Will Harper be able to use the filter to get the life of her dreams? Or will there be more glitches?

Jen Calonita: Jen Calonita is the New York Times bestselling author of the The Retake, Fairy Tale Reform School series, Secrets of My Hollywood Life as well as several books in the Twisted Tale series. She lives in New York with her husband and two boys. Visit her online at: www.jencalonitaonline.com and Twitter @jencalonita.