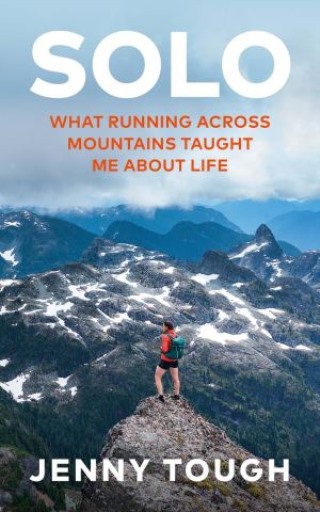 What running across mountains taught me about life

'Jenny Tough writes with the same talent, imagination, and sheer courage that she displays in her athletic endeavours. This book will broaden the horizons of all who venture between its covers.' - Emily Chappell, author of Where There's a Will

'I love that SOLO is part-self help and part adventure story. Jenny shows us all that the journey to self-belief comes with just as many ups and downs as the mountains she traverses and that, with a little trust in ourselves (and a few good cups of coffee) the next seemingly insurmountable pass is never beyond our reach.' - Anna McNuff, author of Bedtime Adventure Stories for Grown Ups

Jenny Tough is an endurance athlete who's best known for running and cycling in some of world's most challenging events - achieving accolades that are an inspiration to outdoor adventurers everywhere. But SOLO tells the story of a much more personal project: Jenny's quest to come to terms with feelings and emotions that were holding her back. Like runners at any level, she knew already that running made her feel better, and like so many of us, she knew that completing goals independently was empowering, too. So she set herself an audacious objective: to run - solo, unsupported, on her own - across mountain ranges on six continents, starting with one of the most remote locations on Earth in Kyrgystan.

SOLO chronicles Jenny's journey every step of the way across the Tien Shan (Asia), the High Atlas (Africa), the Bolivian Andes (South America), the Southern Alps (Oceania), the Canadian Rockies (North America) and the Transylvanian Alps (Europe), as she learns lessons in self-esteem, resilience, bravery and so much more. What Jenny's story tells us most of all is that setting out to do things solo - whether the ambitious or the everyday - can be invigorating, encouraging and joyful. And her call to action to find strength, confidence and self-belief in everything we do will inspire and motivate.

Jenny Tough is an adventure traveller originally from Canada. She enjoys writing about her solo mountain expeditions and tales of world travel as a solo female. Jenny has been featured by National Geographic, BBC Scotland, Women's Running, The Great Outdoors and more. In 2020 she edited Tough Women Adventure Stories, published by Summersdale. When she's not exploring the mountains of the world, she lives in Scotland, and occasionally wherever she parks her adventure van.