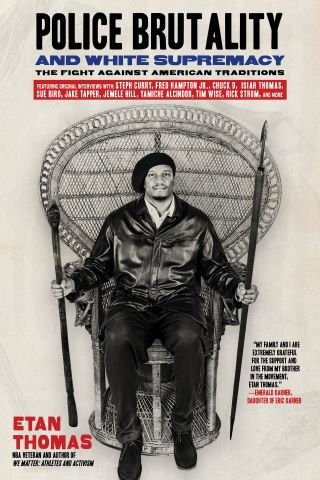 The Fight Against American Traditions

An NBA veteran offers engaging interviews and reflections that explore police brutality, white supremacy, and the struggle for racial justice in America.

"The book is filled with thought-provoking interviews and commentary on police brutality, white supremacy, and the lack of racial equality in the United States. Thomas interviewed victims of police brutality and their family members to convey what they actually went through and allow them to share what they experienced directly."
—Bullets Forever

"My family and I are extremely grateful for the support and love from my brother in the movement, Etan Thomas."
—Emerald Garner, daughter of Eric Garner

"I'm extremely grateful to Etan for continuing to shine a light on how police violence has harmed families across the nation. Our stories matter."
—Dr. Tiffany Crutcher, twin sister of Terence Crutcher

Thomas speaks with retired police officers about their efforts to change policing, and white allies about their experiences with privilege and their ability to influence other white people. Thomas also examines the history of racism, white supremacy, and the prevalence of both in the current moment. He looks at the origins of white supremacy in the US, dating back to the country’s inception, and explores how it was interwoven into Christianity--interviewing leading voices both in and outside of the church. Finally, with prominent voices in the media and education, Thomas discusses the continued cultivation of these injustices in American society.

Police Brutality and White Supremacy demands accountability and justice for those responsible for and impacted by police violence and terror. It offers practical solutions to work against the promotion of white supremacy in law enforcement, Christianity, early education, and across the public sphere.

Etan Thomas: ETAN THOMAS, a former eleven-year NBA player, was born in Harlem and raised in Tulsa, Oklahoma. He has published multiple books including: We Matter: Athletes and Activism (voted a top ten best activism book of all time by BookAuthority), More than an Athlete, Fatherhood: Rising to the Ultimate Challenge, and Voices of the Future. Thomas received the 2010 National Basketball Players Association Community Contribution Award as well as the 2009 Dr. Martin Luther King Jr. Foundation Legacy Award—both honoring his advocacy for social justice. He is a senior writer for BasketballNews.com and a regular contributor to the Guardian and The Undefeated. He can frequently be seen on MSNBC as a special correspondent and cohosts a weekly show with Dave Zirin called, The Collision: Where Sports and Politics Collide.