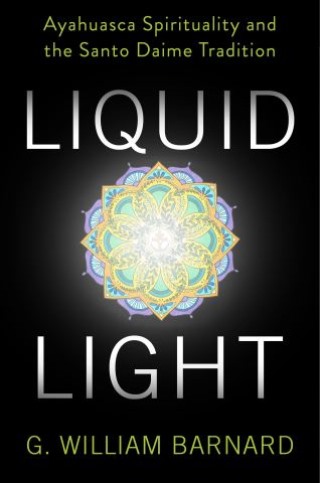 The Santo Daime is a syncretic religion that arose in the Amazon region of Brazil in the middle of the twentieth century and now has churches throughout the world. Its spiritual practice is based around the sacramental use of ayahuasca, a psychedelic brew consumed only within regular ceremonies. In Liquid Light, G. William Barnard—an initiate of the religion and a scholar of religious studies—considers the religious practice and transformative inner experiences of the Santo Daime community.

Immersing readers in his own journeys into nonordinary states of consciousness, Barnard provides a vivid as well as introspective depiction of the dramatic ritual and visionary worlds that a practitioner of this tradition encounters. He combines striking first-person accounts of the ritual life of the Santo Daime with accessible examinations of the psychological and philosophical significance of mystical states and mediumship. Bridging insider and outsider perspectives on religious experience, Barnard demonstrates how the Santo Daime offers its practitioners a transformative and profoundly illuminating spiritual path. Liquid Light also reflects on the broader implications of psychedelics, arguing that entheogenic religions can shed light on a wide range of key philosophical questions concerning consciousness, selfhood, and reality.

G. William Barnard: G. William Barnard is a professor of religious studies at Southern Methodist University. He is the author of Exploring Unseen Worlds: William James and the Philosophy of Mysticism (1997) and Living Consciousness: The Metaphysical Vision of Henri Bergson (2011), as well as coeditor of Crossing Boundaries: Essays on the Ethical Status of Mysticism (2002).