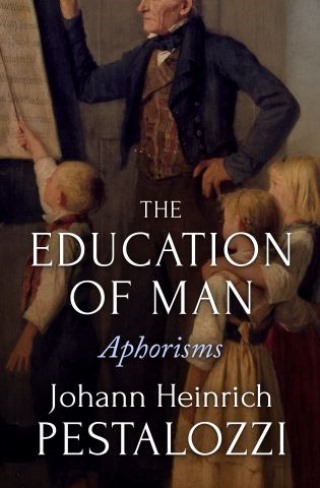 The Education of Man

Timeless words of wisdom from the eighteenth-century teacher who transformed the world of education with his groundbreaking ideas.

Johann Heinrich Pestalozzi rose to prominence during the Age of Enlightenment, bringing the spirit of equal opportunity and respect for human personality into the classroom, just as Thomas Jefferson imbued such virtues into the Declaration of Independence. The foundation of Pestalozzi’s educational philosophy rested on six principles: the inner dignity of the individual; the promise of potential in each child; love as the basis of education (as opposed to punishment); his doctrine of Anschauung, experience-based learning; appropriate action following Anschauung, and an emphasis on repetition of said action.

This philosophical grounding influenced the great remaking of American education from 1830 to 1860, resulting in changes that have been felt through the centuries and remain relevant today. The Education of Man gathers Pestalozzi’s enduring thoughts on subjects as wide-ranging as humanity, teaching, poverty, justice, truth, and nature, including such observations as . . .

People are led by custom and catchwords, but facts they are wont to overlook.

The man who seeks to rule as a father before he has learned to love as a brother will never be a patriarch.

Sooner or later, but of a certainty in the end, Nature will take her toll for what men do against her.

Learning is not worth a penny when courage and joy are lost along the way.

The world grows poor in seeking to avoid poverty; the man who strives for riches most earnestly is seen to be the poorest.