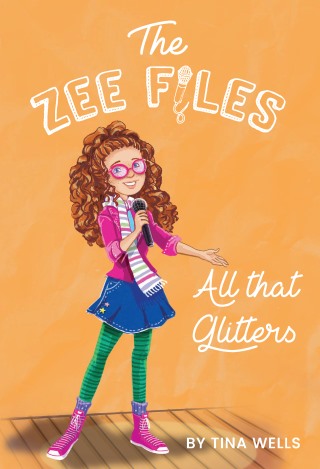 See where London takes Zee next in Book 2 of The Zee Files, the spin-off series to the bestselling Mackenzie Blue books!

"The second book in the [Zee Files] series continues to follow Mackenzie (Zee) Blue Carmichael through her life in her new school, the Hollows. She has been so stressed with her academics, new country, new home, new school, new friends, and the upcoming festival performance that her teacher reached out to her father and Zee has started seeing a counselor at school. . . [Zee] has a few successes toward the end. . . Scattered illustrations throughout the book are well designed and carried out, I especially enjoy how emotive they are."
—Youth Services Book Review

"In this second installment of the Zee Files, a spinoff of the Mackenzie Blue series, Zee is preparing a song for her school’s art festival. Year nine has proven to be difficult as she adjusts to her new life in the U.K. and being the new student at a posh British boarding school. Zee’s classmates proffer coping tips: meditation, yoga, affirmations. Then Zee begins to see a therapist who encourages journaling. . . Zee is definitely a girl of the 21st century."
—Kirkus Reviews

The crew can't stop talking about the school's biggest event and talent show of the year, the Creative Arts Festival. But while Zee's excited to see her friends and schoolmates perform, she's not sure if she'll ever be ready for the stage. She's never performed in front of so many people before, or without her bandmates—or in England, no less!

With the Festival slowly approaching, classes also get harder while things with her friends and family become more complicated. Will Zee be able to pull it all together in time?

Tina Wells: Tina Wells is a business strategist, advisor, author, and the founder of RLVNT Media, a multimedia content venture serving entrepreneurs, tweens and culturists with authentic representation. Tina has been recognized by Fast Company's 100 Most Creative People in Business, Essence’s 40 Under 40, and more. For over two decades she led Buzz Marketing Group, an agency she founded at age 16 with clients like Dell, The Oprah Winfrey Network, Kroger, Apple, P+G, Johnson & Johnson, and American Eagle that Tina connected with her network of 30,000 buzzSpotters® and 7,000 “momSpotters”, all influential millennials and passionate end-consumers. Tina is also the author of seven books, including the best-selling tween fiction series Mackenzie Blue, its 2020 spinoff series, The Zee Files, and the marketing handbook, Chasing Youth Culture and Getting It Right. Tina’s board positions have included THINX, the United Nations Foundation’s Global Entrepreneurs Council, The Franklin Institute and Young Entrepreneur’s Council. She has also served as the Academic Director for Wharton’s Leadership in the Business World Program at the University of Pennsylvania and is a member of the 2017 Class of Henry Crown Fellows within the Aspen Global Leadership Network at the Aspen Institute.