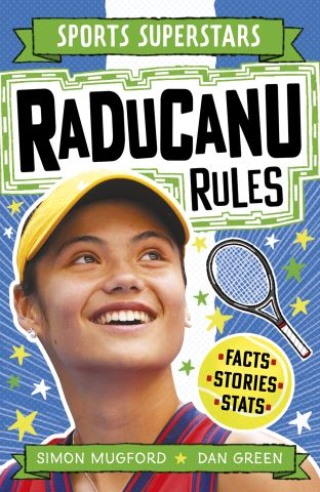 Is the newly crowned US-Open champion Emma Raducanu your ultimate sporting hero? Having turned professional only in 2018, the 18-year-old British tennis star has taken the game by storm! The signs were already there when Emma made her main draw Grand Slam debut at the 2021 Wimbledon Championships, where she reached the quarter final. But it was her amazing triumph at the 2021 US Open that has shocked the world and made her into a household name. Now you can read her story. Packed with cool facts, delightfully fun illustrations and inspirational quotes, Sports Superstars: Raducanu Rules promises to be a page turner for young fans, who want to be inspired by the new golden girl of tennis.

The Sports Superstars series is aimed at building a love of reading from a young age, with fun cartoons, inspirational stories, a simple narrative style and a cast of characters chipping in with quotes, jokes and comments.

Simon Mugford: After studying the history of everything at Goldsmiths College, Simon worked at the Science Museum making paper aeroplanes and setting fire to hydrogen balloons. Despite being a fully grown man, his favourite subjects include dinosaurs, robots, rockets, loud music and Star Wars. An Ipswich Town fan since they won the FA Cup in 1978 (it's true – look it up) he lives in Kent with his wife, daughter, and a cat with two names.