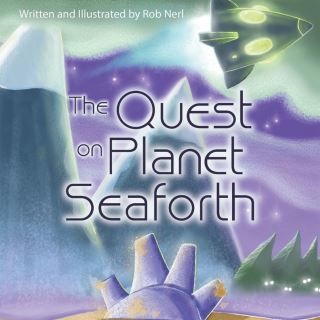 The Quest on Planet Seaforth

Adventurers Bobby and Christy prepare for their space voyage to the planet Seaforth. Traveling in a tiny spaceship, they eventually arrive and find a dark planet. They have nothing to fear because they are best friends, and best friends protect each other.

There are lots of places for Bobby and Christy to explore. Seaforth has not only mountains, but stretches of beach and sea too. All that space makes their mission difficult as they search for a magic Box that possesses remarkable power.

On cloudy Seaforth, these two best friends work hard to find this Box and eventually follow a mysterious light. Danger surrounds them as their quest continues, but they do make interesting friends along the way. To survive, they must depend on their creativity, fearlessness, and compassion.

The dirt and sand seem to dance around them.

Bobby & Christy lifted the box, with it all aglow.

Our explorers were startled and just froze.

Rob Nerl: Rob Nerl is a kid at heart. His imagination and creativity took him to The School of Visual Arts in New York City where he earned his BFA in illustration. He soon began working freelance for a number of publications as an editorial illustrator, becoming the second generation of his family to be published.