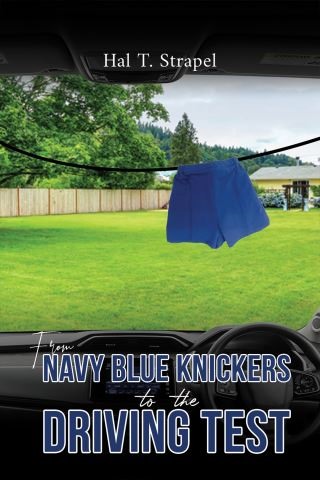 From Navy Blue Knickers to the Driving Test

This book required a lifetime of experience and sixteen years to write. Mind you, there was an eight-year gap in the middle when the author had to return to full-time, salaried employment. The chapters are presented alphabetically, so in theory it is possible to take any chapter, and read it in its own right. Once a reader has read all twenty-six chapters, he or she will have a sum of all the parts: a completed ‘jigsaw’ of Hal T. Strapel’s story. Truth or fiction? Let the reader decide.
Jane C.:
“In ‘Turning Thai’, I think a very vivid picture of Thailand is presented — it all sounded very exotic to me sitting in dull old middle England. Lots of well-described local colour and all fluently articulated. The author met up with some colourful characters and gives an honest appraisal of how they affected him as a traveller in uncharted territory. There is definitely an eye for detail and the sights, sounds and smells leap off the page. I had a good laugh at the cockroach episode, which sounds very callous of me, but it resonated with me as I had a similar sort of experience in Sicily with a very large spider.”
John H.:
“I found ‘Bilious Belligerent Bowels’ highly entertaining, particularly when Hal was describing the attentions of the nurse and her colleagues.
Charlie H.:
“I found ‘Queenish Quirks’ an intriguing and easy read that connects cultures in a relatable way.”
Lee F.:
“I enjoyed reading ‘Lust for Lingerie’. It sounds voyeuristic in itself! As a man who spent his working life in ladies knickers I can see the author is knowledgeable!”
Johnny B.:

Hal T. Strapel: The author was born in Cambridge, England in 1951. He did his schooling in the city or surrounding area, and then spread his wings in 1970. He followed a chequered career, mainly because of his desire to play music. The music industry is not the easiest avenue in which to earn a steady income, so assorted employment was required to keep the wolf from the door. Having a very independent character, self-employment suited him the best, and he made successes in both retail and educational fields. His love of travel and foreign countries finally saw him move to Thailand in 1998.