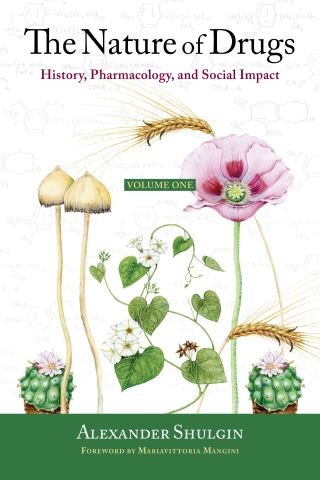 The Nature of Drugs Vol. 1

The Nature of Drugs: History, Pharmacology, and Social Impact, Volume 1, presents lectures from Alexander “Sasha” Shulgin’s popular course on what drugs are, how they work, how they are processed by the body, and how they affect our society.

Transcribed from the original lectures recorded at San Francisco State University in 1987, The Nature of Drugs series highlights Shulgin’s engaging lecture style peppered with illuminating anecdotes and amusing asides. Ostensibly taught as an introductory course on drugs and biochemistry, these books serve as both a historical record of Shulgin’s teaching style and the culmination of his philosophy on drugs, psychopharmacology, states of consciousness, and societal and individual freedoms pertaining to their use, both medicinal and exploratory.

The Nature of Drugs, Volume 1 features course lectures 1 through 8 and offers Shulgin’s view on the origin of drugs, the history of U.S. drug law enforcement, human anatomy, the nervous system, the range of drug administrations, varieties of drug actions, memory and states of consciousness, and research methods. It lays the groundwork for Shulgin’s philosophy on psychopharmacology and society.

The Nature of Drugs series presents the story of humanity’s relationship with psychoactive substances from the perspective of a master psychopharmacologist and beloved luminary in the study of chemistry, pharmacology and consciousness.

Audiobook note: The Nature of Drugs, Volume 1 audiobook contains portions of the original 1987 recordings of Shulgin himself conducting his course and interacting with his students. Those original clips are interlaced with newly recorded narration that fills in portions with more optimal audio quality.

He is most often remembered for his rediscovery and synthesis of a chemical known as MDMA, commonly known as Ecstasy, a drug Shulgin suggested would be a powerful aid in therapy.

Completing his Ph.D. in biochemistry at the University of California, Berkeley in 1955, Shulgin went on to get a job at the Dow Chemical Company, where he invented a highly lucrative, biodegradable pesticide,  Zectran. Ultimately, Shulgin went on to pursue his own research program, synthesizing psychoactive substances after an experience with mescaline.

Shulgin left Dow in 1966, setting up a home-based laboratory on his ranch in Lafayette, California, where he synthesized more than two hundred novel psychoactive compounds. A bold explorer of the frontiers of neurochemistry, Shulgin tested the majority of the substances he synthesized on himself, his wife and co-researcher, the late Ann Shulgin, and a small circle of trusted friends.

The Shulgins and their friends kept diligent notes on their experiential research forays, and later founded Transform Press in 1991 out of their shared passion and commitment to an uncensored examination of psychoactive compounds. Through Transform Press they co-authored and published PiHKAL: A Chemical Love Story (1991) ad TiHKAL: The Continuation (1997), a sequel to PiHKAL, standing for “tryptamines I have known and loved.” Shulgin’s work has been featured in two Netflix documentary series: “The Business of Drugs” (2020) and “How to Change Your Mind” (2022).

In the 1980s, Shulgin taught a popular course on drugs and society at San Francisco State University. In 1987, he recorded his lectures and interactions with his students, and those transcriptions became the series, The Nature of Drugs: History, Pharmacology, and Social Impact. Volume 1 published in 2021, and Volume 2 is forthcoming in 2023.