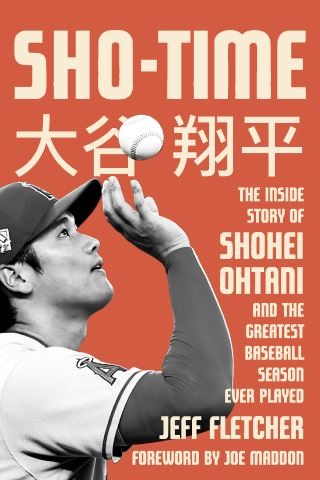 The story behind Shohei Ohtani’s legendary MVP season as baseball’s greatest two-way player—dominant pitcher and outfielder/DH with otherworldly power at the plate—and his path from his early days in Japan to the most fascinating figure in Major League Baseball, with a start-to-finish inside look at his historic 2021 season.

Shohei Ohtani of the Los Angeles Angels is playing baseball like no other major leaguer since Babe Ruth. His dominance as a two-way player—an electric pitcher and an elite slugger—made him the 2021 American League Most Valuable Player, the only player ever selected as an All Star as both a pitcher and hitter, and a member of Time 100’s most influential people of 2021.

In Ohtani’s first two-way game of the 2021 season, he threw a pitch at 100 mph and hit a homer that left his bat at 115 mph, a confluence of feats unmatched by anyone else in the sport. He racked up eye-popping achievements all year. But awards and numbers tell only part of his amazing story.

In Sho-Time, award-winning sports writer Jeff Fletcher, who has covered Ohtani more than any other American journalist, charts Ohtani’s path through Japanese baseball to a championship with the Nippon-Ham Fighters, the recruiting war to bring him to the majors, his 2018 AL Rookie of the Year campaign, subsequent injury-riddled seasons, and then his historic 2021 season. Along the way, Fletcher weaves in the history of two-way players—including Babe Ruth and unsung Negro Leagues players like “Bullet” Joe Rogan, Martín Dihigo, and Ted “Double Duty” Radcliffe—and the Japanese athletes who preceded Ohtani in the majors. With insight from Japanese and American baseball front office personnel, managers, scouts, athletic trainers, ballplayers, and more, Sho-Time breaks down the physics of Ohtani’s game, his technologically advanced training, his international fame, and the role he and teammate Mike Trout are playing to lead baseball into the next generation.

Jeff Fletcher: Jeff Fletcher has covered Major League Baseball since 1997, including eight seasons on the Los Angeles Angels beat for the Orange County Register, and has covered Shohei Ohtani more than any other writer in the United States. Jeff has also covered the San Francisco Giants and Oakland A's and worked as a national baseball writer. He is a Hall of Fame voter and has served as chairman of the Los Angeles chapter of the Baseball Writers Association of America since 2015. He lives in Los Angeles, California.